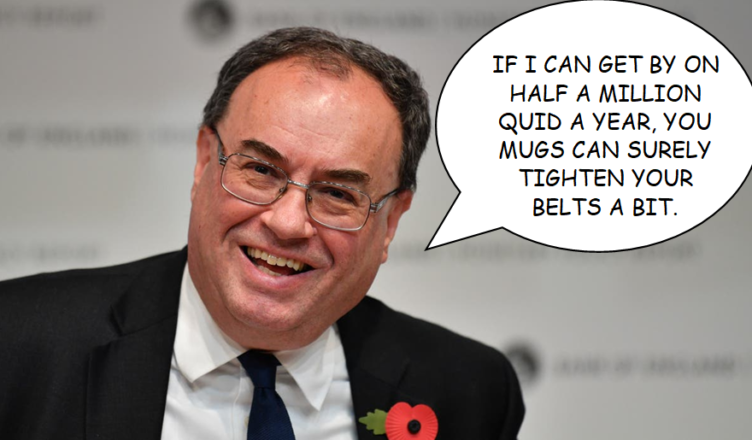 On 4th February, we mentioned on the ACG website the governor of the Bank of England, Andrew Bailey, who was calling for wage restraint in the face of rising energy and food bills. That’s all very well for him to say, but then, Mr Bailey is paid over half a million quid a year and we’re sure he doesn’t need to worry much about whether to eat, keep warm or pay an extortionate rent to a greedy landlord. In fact, in the year 2020-2021, Bailey was paid the princely sum of £575,538 (pension included). That’s a whopping 18 times higher than the UK median wage of £31,285. And, of course, the median wage itself is the kind of pay packet that most working class people can only dream of.

Such comments show the crass and uncaring cynicism of the parasite class. And the fact that they have the gall to tell those of us at the sharp end of the capitalist racket to tighten our belts, while they get paid unimaginable sums, should tell anyone with any sense that the current system needs to go.