Please order all items at the Shop. https://www.anarchistcommunism.org/shop/

The Kronstadt Revolt: The flower of the revolution crushed by the Bolsheviks 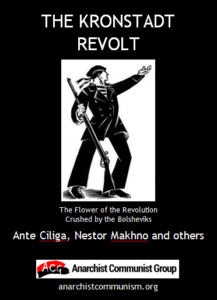 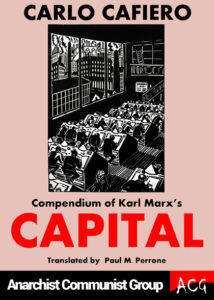 The ACG is pleased to be publishing the first English language print edition of Carlo Cafiero’s summary of Karl Marx’s Capital.

Capital, Marx’s epic work, describes in detail the capitalist system and how it functions. The anarchist Mikhail Bakunin saw the importance of Marx’s Capital, to the extent that he put any rivalries with Marx aside and immediately embarked on the first Russian translation.

But Capital is a notoriously hard read…

The anarchist communist Carlo Cafiero, rather than translate it, wanted to popularise Marx’s work in order to make it easier to read and be better understood by those who didn’t have a university education or weren’t so well versed in economics. In other words, his Compendium was aimed at ordinary working people.

Cafiero’s Compendium is a gateway to understanding the contents of Marx’s Capital.

This edition, translated by Paul M. Perrone, contains an ACG introduction and a biography of Carlo Cafiero.

Order your copy via PayPal to londonacg@gmail.com 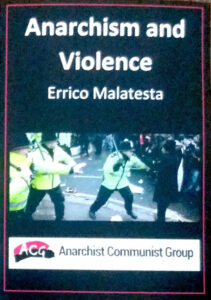 Anarchism and Violence, published May 2020 is a pamphlet from the Surrey group of the Anarchist Communist Group.

The pamphlet contains extracts from Malatesta’s “Life and Ideas”. The issues covered are as relevant today as they were when it was first published 25 years ago by the London group of the Anarchist Communist Federation.

In the booklet, Malatesta discusses the question of violence and why adequate means are required to resist force.

Order your copy via PayPal to londonacg@gmail.com

Food, Health and Capitalism: Covid-19 and Beyond 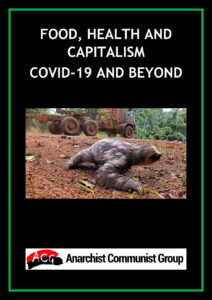 This pamphlet goes to the roots of the current pandemic, locating the causes in capitalism, including land use, the way we organise food production, and what we eat. It starts by looking at zoonotic diseases- those that have moved from animals to humans- and discusses how capitalism created the environments for lethal human-animal interactions.  It moves on to discuss industrial agriculture, its use of antibiotics, pesticides and synthetic fertilizers, and its impact on health. The pamphlet then continues with a look at food consumption and the role of capitalism in facilitating not just zoonotic diseases but also non-communicable diseases such as diabetes and heart disease. Unhealthy diets are discussed in the context of food insecurity, domination by global food corporations and class inequality.

Virus: In the Body Politic 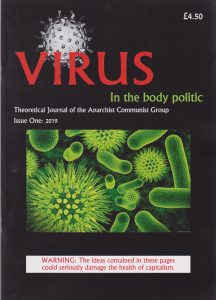 First issue of ACG theoretical magazine Virus: In The Body Politic. 56 pages with articles on : Beyond XR: The Limits of Extinction Rebellion; Capitalism, Land and Climate Change; The Yellow Vests: Where Now?; Anarchy, Punks, and Sweatshops; Organising To Win; Dossier 1919, with articles on Unrest in Britain, the 1919 Police Strike, the Seattle General Strike, the Winnipeg General Strike, and Soviets in Ireland; Anarchist Communism and the Struggle Against Oppression; What Is Fully Automated Luxury Communism; The Socialism of the Intellectuals: Jan Waclaw Machajski; plus book reviews.

VIRUS in the body politic – issue No 1

Print version available from the ACG for £4.50 (includes postage)

Anarchism and Organisation by Errico Malatesta 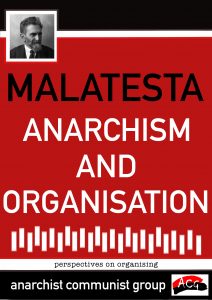 The Anarchist Communist Group’s pamphlet on the NHS.

With sections on: Health and Capitalism; The NHS, Why We Should Defend It and Move Beyond It; Working Fpr The NHS; What Changes in Health Services Do We Want To See?and Conclusion: Why Should We As Anarchist Communists Defend The NHS.

An important new pamphlet, it clearly lays out Anarchist Communist views on health – a must get.

The Italian Factory Councils and the Anarchists 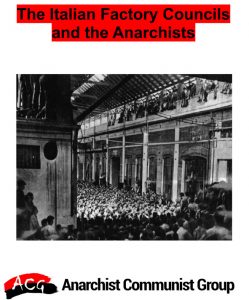 The history of the Italian factory councils of 1920-1921 deserves to be more widely known outside academic circles and revolutionary groups. That’s why we have brought out this cheap pamphlet. We believe that the events surrounding the factory councils should be highlighted for a number of reasons. They point to alternative forms of organisation that appear at times of revolutionary ferment and Outside of Turin the movement was predominantly driven by Anarchists and Anarcho-syndicalists – something which our “friends” the Leninists don’t want you to know about.

Towards A Fresh Revolution – The Friends of Durruti 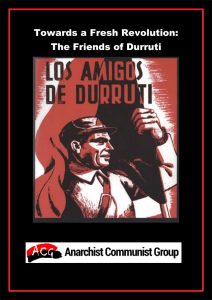 The May Days in Barcelona 1937 brought the Friends of Durruti group to the fore as they fought to save the Spanish revolution from the attacks of the Stalinists and the “anarchist “ ministers. This pamphlet includes important texts from the Friends of Durruti as well as an examination of their ideas and a look at their membership.

“The Friends of Durruti’s analyses…link up with what could be described as the libertarian communist pole in the realisation of a need for a specific revolutionary organisation, developing a theory and programme. The balance sheet is by and large positive-the Friends represent an important moment in the construction of libertarian communism”. 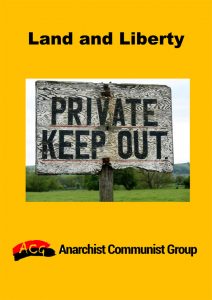 The slogan ‘Land and Liberty’ has long been an anarchist slogan. It is not surprising that land is a key demand. Campaigning on land should be a priority for anarchists and all those who would like to overthrow the current society.

Land issues underlie so many other issues, the environment, biodiversity, food, leisure and recreation, housing, work and livelihood, and social and community spaces. This little pamphlet examines the interconnections between these issues. 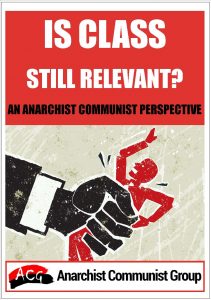 This pamphlet argues that yes, class is still relevant and is a “structural relationship between two classes…. it is not an identity – even if you do not identify as part of the working class, you still are.”

As the pamphlet states: “It has become increasingly popular among academics and others that the working class is either tiny or no longer a key player in the struggle for a new society…the implication is that ‘class struggle’ is less important and the focus should be on ‘people’ or other oppressed groups. In fact some would go so far as to argue that the white, male working class is reactionary and more of an enemy than a key component of revolutionary struggle.”

The pamphlet outlines the evidence for the existence of class, and argues that it is central to a struggle against the present system.  As it notes: “The vast majority of people are working class. It is in their interest to overthrow capitalism for a number of different reasons, not just because of exploitation at work. There are other oppressions that exist in society, linked to capitalism but with their own dynamic and impacts. There are many ways that class struggle is linked to the struggle against oppressions; patriarchy and racial oppression are embedded within capitalism. Capitalism benefits from unpaid labour in the home and historically benefitted from the slave trade. Oppressed groups are often the worst affected by capitalism and State violence. The culture and ideology of capitalist society, supported by religion, encourages bigotry and conservatism towards nonconforming sexualities and genders. And, even if the oppression does not seem to directly relate to the class struggle, it is wrong and must be fought. We cannot create an anarchist communist society as long as there are any oppressions.”

Whatever Happened to the Revolution? 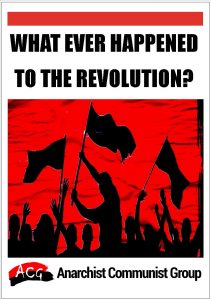 This pamphlet describes what a revolution is, a fundamental transformation of society such that all social relationships are significantly altered. It enumerates the revolutions that have happened throughout history and argues forcefully for the need for a revolution. Along the way it looks at the inadequacies of reformist solutions and the false alternatives of Labour and other social democratic parties. As it concludes: “We need to develop a strategy which starts from the premise that a social revolution, encompassing all aspects of life is desirable, necessary and possible. The revolution will not just happen; the conditions have to be right and revolutionaries have an important role to play in a number of ways. However, this does not mean that we can predict, determine or control what happens. We need to be organised with the end in mind. This means that it is not enough to be organised just on the local level or in single issue campaigns. We need to be organised on a territorial and indeed transnational level with the conscious aim of promoting revolutionary activity. An important part of this revolutionary work must by long-term within the wider working class: resisting attacks, creating alternatives and building up an effective movement and a culture of resistance.”

Fight for the City! 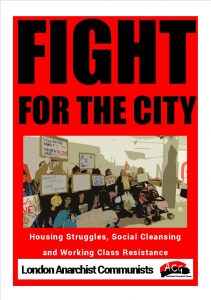 A new pamphlet by London Anarchist Communist Group, Fight For The City.

Britain and other western countries have seen a massive increase in the cost of housing, increases in evictions and homelessness, whole council estates torn down and sold off to private developers, overcrowding in squalid accommodation, city centres privatised and transformed into sanitised shopping malls, business centres and tourist destinations, attacks on the poor – cuts in benefit, the bedroom tax, low wages, fewer green and open spaces and more sky scrapers, increased pollution, police violence, and increased surveillance.

This pamphlet covers all issues related to the city as a site of class struggle, housing, gentrification , social cleansing, privatisation of space, the general takeover of the city by corporate interests, crackdowns on social movements, demonstrations and fightbacks against all this.

Available from the ACG for £3.00 (includes postage)

The Wilhelmshaven Revolt:
a Chapter of the Revolutionary Movement in the German Navy
1918-1919
by ‘Ikarus’ (Ernst Schneider) 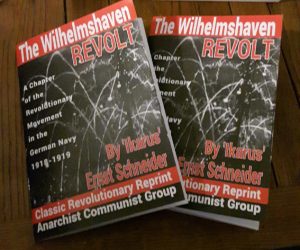 In this, the centenary year of the ending of World War 1, the ACG looks at a lesser known moment in revolutionary working class history which took place at that time. The events in Germany during 1918-1919 were arguably an example of our class at its most revolutionary.

Written from the viewpoint of someone involved in those revolutionary events, The Wilhelmshaven Revolt is an inspiring read, particularly in this current period of low class-consciousness and low working class activity. It not only shows us what is possible but what to avoid, namely, trust in reformist politicians and those who seek to act in the name of the working class with statist and Leninist “solutions”.

If overseas, drop us a line to ask about any extra postage costs.

The following book is the autobiography of the 97 year old revolutionary anarchist communist in Bulgaria, Alexander Nakov. This first English translation was edited and contributed to by members of the Anarchist Communist Group.

The Dossier of Subject No. 1218:
A Bulgarian Anarchist’s Story
by Alexander Nakov

Of the few who managed to survive the horrors of Bulgaria’s Stalinist concentration camps, Alexander Nakov is possibly the most representative of the older generation of active and committed anarchists. 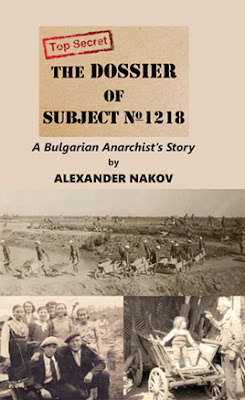 Initially reluctant to write his memoirs, Alexander was eventually persuaded by friends that his story needed to be told. And by telling that story, he now remains a vital link between the anarchist militants of the past and the youth of today.

In clear and concise prose, Alexander details his youthful activity, his subsequent imprisonment and his fierce resistance to an inhuman system.

As well as his memoirs, this book also contains official government and state security documents about the author – documents that give yet another insight into the anarchist Alexander Nakov, targeted by the “People’s State” and classified as “Subject No.1218.”

Translated from the Bulgarian original by Mariya Radeva, edited by Rob Blow, foreword by Nick Heath.