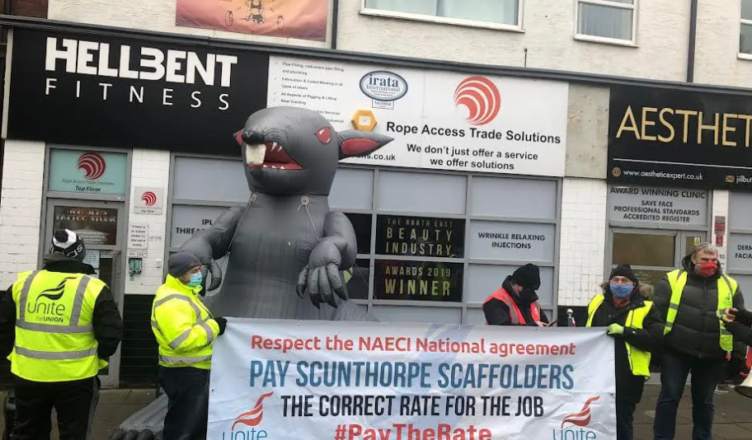 Scaffolding workers employed by Actavo have been taking strike action since last autumn. The 62 workers are based at the British Steel site in Scunthorpe, where they maintain 500 scaffolding sites.

As a result of the 12 week rule on strikes, they voted to continue their strike action at the end of January. They are demanding parity pay in line with a national agreement. Actavo are paying them from between 10-15 per cent below the wage figure in that agreement. Many of the scaffolders have worked at the British Steel site for decades but have been repeatedly outsourced by Actavo to avoid paying the national wage.

The workers in the Unite union maintain 500 scaffolding structures at the British Steel site.

Many of the workers have worked at the site for decades but their work has been outsourced repeatedly. This is the reason Actavo bosses claim they don’t have to pay the national agreement wage.

There have been solidarity actions at Actavo sites in both Britain and Ireland. Banner drops have taken place at Celtic football games. The Actavo boss Denis O’Brien, one of Ireland’s richest men, is one of the owners of Celtic Football Club. In Glasgow, Celtic supporters held up a banner reading “Denis O’Brien not welcome at Celtic FC” and calling for support for the strikers on January 17th.

On January 27th scaffolders and their supporters disrupted an awards ceremony for construction bosses at the posh Hurlingham Club in London. The bosses complained about the “noisy“ protest, whilst some scaffolders who had managed to enter the building were expelled by thuggish security guards.

The strikers have used the tactic of blocking roads into British Steel at Scunthorpe. They have carried the fight to the Lindsey Oil Refinery where another company, Altrad, has scaffolders. Altrad also employs scaffolders at British Steel. The Altrad scaffolders at Lindsey refused to work during the course of the protest.

Last week scaffolders protested outside the offices of the Tory MP Lia Nici in Great Grimsby. She had expressed the opinion that “strike action rarely provides satisfaction”. The scaffolders made use of a giant inflatable rat during the protest. The rat, which has been around for several years, made an earlier appearance on 8th December last, outside Rope Access Trade Solutions in South Shields, accused by the strikers of supplying workers to help British Steel break the strike.

The Scunthorpe scaffolders have shown great determination and have used a number of imaginative direct action tactics, including taking the fight to the enemy on a number of occasions. The ACG salutes them.