No Safety, No Work! 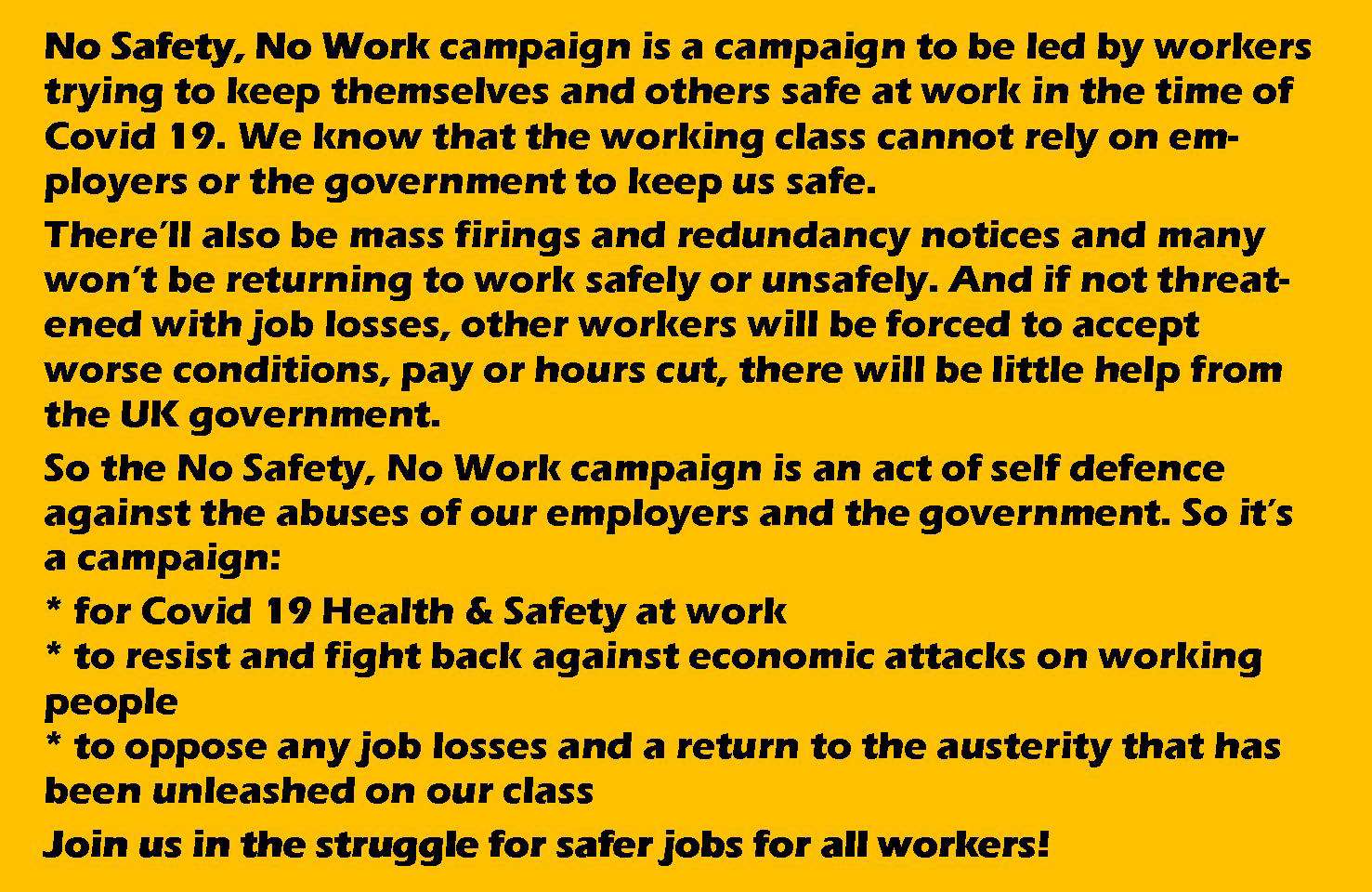 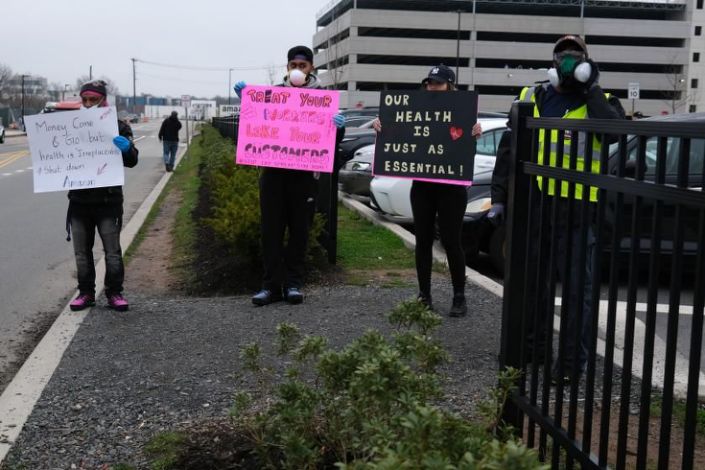 They want us back at work and they want us back now. Many of us have been at work throughout the Coronavirus, cleaning, looking after the sick and vulnerable, in call centres and shops, but now they want everyone else back in order to ‘save the economy’, to get the country back to normal and to keep Britain competitive.

And many of us are desperate to get back to work, not because we miss the commute on packed trains and the traffic jams to be stuck in an office or on the shop or factory floor for 8 hours or more, but because we are struggling. Many of us have been laid-off and dependent upon benefits or on furlough and 20% down on our pay for the last four months.

Without a vaccine, the campaign for return is underpinned by an unspoken policy of ‘herd immunity’, which is being followed in countries like the United States and Brazil to disastrous effect. The UK and devolved governments are undertaking a massive risk with the health of the working population, but the needs of capitalism are too important.

So, despite new infection spikes emerging in advance of schools re-opening in Scotland, the Scottish Government pushes ahead with their plans to get workers back to work regardless.

This means we will be pressurized to return to workplaces where risk assessments have not been undertaken, where safety-focused re-organisation has not happened and where PPE (protective personal equipment) is either ineffective or non-existent. We will be guinea pigs for the sake of profit margins. The state has brought in no new legislation to ensure the implementation of health and safety measure but are leaving this down to individual employers.

The Labour Party and, despite some mild protest, the trade unions, have been supportive of this push towards ‘normalisation’. Even in workplaces with recognised unions, we will be put in potentially dangerous situations whilst union leaders make whining noises. But in the vast majority of cases, particularly in smaller workplaces, we will be pressed to work in ways that we know carry risks and entail increased stress and anxiety.

We have to resist this and we have to do this in a collective way. The No Safety? No Work! campaign urges workers to refuse to endanger themselves, their fellow workers and their families. This could mean organising independent health and safety committees in the workplace, running awareness campaigns, taking action. In order to encourage this and to break down the sense of isolation that workers feel, the No Safety? No Work! campaign will work to create support hubs across the UK, offering information and practical support to any workers who want to resist the march to death being organised by the government. Get in touch, we will put you in touch with other workers locally so that you don’t have to fight alone. No Safety? No Work! We won’t die for their profits!

Initial statement from No Safety, No Work campaign (July 2020)

Many workers are being asked to work in unsafe environments. Many more will be asked to do so as they return to work over the coming days and weeks.

The Anarchist Communist Group (ACG) is launching a No Safety, No Work campaign. This is a campaign to be led by workers trying to keep themselves and others safe at work in the time of Covid 19. We know that the working class cannot rely on employers or the government to keep us safe.

Tens of thousands of people have died in this pandemic, and additionally many die in the work place every year. None of these deaths were inevitable but were the results of the greed of the bosses and the rulers of our society. As more and more people are returning to work, the government has not passed a single law guaranteeing workers safety but has issued guidance to employers. This is not enough to keep us safe.

Other workers, meanwhile, will be hit with firings and redundancy notices and won’t be returning to work safely or unsafely. And if not threatened with job losses, other workers will be forced to accept worse conditions, pay or hours cut, there will be little help from the UK government.

Individually workers can do very little to protect themselves, but together we can make a difference. The No Safety, No Work campaign is an act of self defence against the abuses of our employers and the government. Campaigns such as these exist to both protect workers lives today, but also to act as template for and a guide to a better society; a society where workers have control, autonomy, and are not beholden the bosses.

The government and the wealthy will use the current crisis to cut taxes on the rich and steal from the poor. They can only do that if we, the working class, allow them to. This campaign will be part of a movement to resist and fight back against economic attacks on working people. It is a campaign which firmly opposes any job losses and a return to the austerity that has been unleashed on our class by the bosses and successive governments over the last decade.

We want to hear from you

If you are being asked to work in an unsafe environment and want your employer named and shamed, let us know by emailing us (details below).

We are also looking for people to write accounts of their return to work and the lack of health and safety in the workplace. The No Safety, No Work campaign will treat all whistleblower information securely and confidentially.

If you are involved in a struggle against your employer and you want help or information, then get in touch.

This campaign is also aimed at union members not to let their unions sell out on their previous terms and conditions in return for jobs. If you think your union is doing this, tell us.

If you are an individual or a group that would like to be involved in the campaign then get in touch (email address below).

Solidarity Federation – Coronavirus rights at home and at work