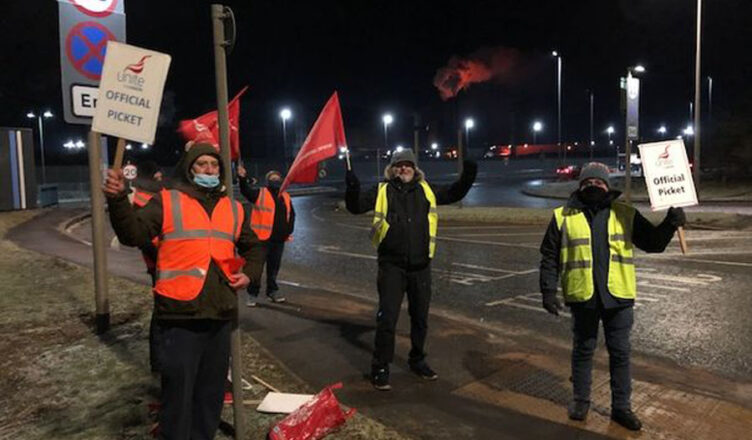 Workers at Heathrow Airport are preparing to strike over plans by bosses to fire and rehire all of the 4,000 workers, in a scenario similar to that at British Gas. Workers have already come out on strike over four days in December. The next strike is due on 5th February. Bosses intend using the sacking and rehiring ploy to reduce workers’ wages by up to 25%.

Scaffolders at British Steel’s Scunthorpe plant went on strike on Monday January 25th and put up a socially-distanced picket. They are taking industrial action over a long-running dispute which started in 2019. They want pay parity with the National Agreement for the Engineering Construction Industry. They are paid £2 an hour less than this national wage agreement. A ballot for the strike was 100% with fifty scaffolders coming out on strike. Their employers, the sub-contractor Brand Energy are refusing to pay the difference. Two further one day strikes are planned.

Porters at the Heartlands Hospital in Birmingham are striking against shift changes that mean they face nine different start times, with two days on, one day off, then two days on. This follows a threat of firing and and re-hiring, threatening redundancy for 36 workers if they refuse to agree to these new shifts (see the pattern here?). Eleven strikes have taken place already, and porters will again be going out on February 1st. The University Hospitals Birmingham NHS Foundation Trust is chaired by the Labour MP Jacqui Smith, previously implicated in an MPs expenses scandal. Porters have sacrificed much during this pandemic and now they are being treated shoddily by Smith and her cronies.

Drivers working for Eddie Stobart at the Walkers crisp factory in Warrington are planning to strike from 17th February for four days. The bosses at Eddie Stobart have imposed a pay freeze. Workers responded with a three week overtime ban and are now gearing up for the strikes.

Labour-run Tower Hamlets Council is planning to shut down the library at Cubitt Town, slash opening hours at the Bethnal Green library by 15 hours a week and turn the library at Watney Street Market from a three story building into a one story library. This would mean the equivalent of 35 full time jobs going. The Labour Council, with John Biggs at its head, is also targeting adult day centres. These were shut during lockdown and now the Council plans to close the centres -Riverside, Day Opportunities and Pritchard Roads Day Centres, on 31st March 2021. This will result in the loss of 24 jobs. Tower Hamlets Council has already faced a strike on July 3rd last year, which saw thousands of workers coming out after a plan to fire and re-hire them (that pattern again!) with new contracts on worse terms.

The Council is pushing for these cuts when the working class in Tower Hamlets needs libraries and day centres even more, with the most vulnerable being sorely affected by the threatened closures of the day centres.

Care workers and cleaning workers organised in the grassroots union United Voices of the World at the Sage care home went out on a three day strike two weeks ago. They are demanding a £12 an hour living wage and better conditions, in line with those in the NHS. Further strikes are planned for 4th-8th February.