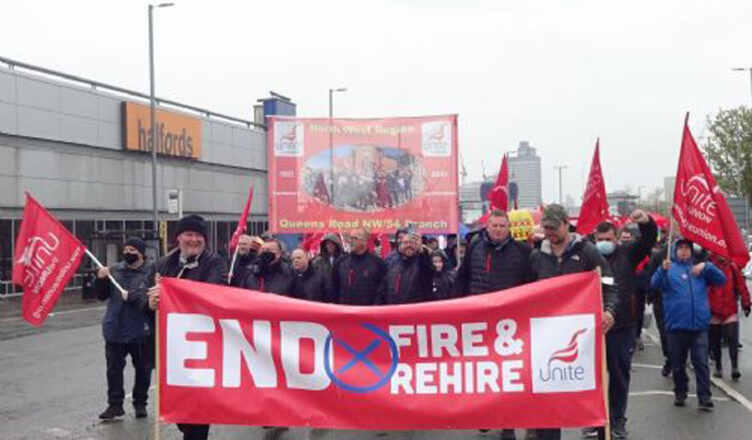 The bosses of Go Ahead, the company that is big in public transport in Britain, has dropped a threat to make bus workers on strike in Manchester subject to a fire and rehire attack.

The 400 bus workers have been out on strike for ten weeks. The strike will continue until workers vote on a new deal now put forward by Go Ahead. As well as backing down on fire and rehire, two sacked workers will be reinstated. Go Ahead wanted to impose a new contract that would have left bus workers £2500 worse off per annum. This triggered the long strike.

The striking workers joined the May Day march in Manchester, marching at the head of the demonstration with a new banner made for the occasion.

In London, bus drivers working for London United in south and west London suspended their strikes after being offered a new deal by French-owned RATP, who own London United.

Tugboat crews working at Devonport naval base in Plymouth went out on a 24 hour strike on 9th April, followed by another on 26th April. This was against the proposal by Serco Marine, who employ the crews, to impose a new rota system, where crews were expected to work three weeks on, three weeks off, rather than the previous one week on, one week off system.

This new system puts massive pressure on workers and creates health and safety concerns about working under extreme fatigue.

Serco Marine are refusing to budge, and the 40 workers are preparing for four more days of strikes in the middle of May.

Bin workers in Thurrock in Essex have been on strike for three weeks after bosses proposed to do away with payments for anti-social hours which would lead to workers being up to £4,000 worse off per year for loaders and drivers. The implications for refuse workers in other boroughs, for care workers and others who depend on these extra and enhanced payments to make a half-decent wage, are extremely serious. At the same time care workers in Thurrock are now in dispute with the same employer over similar proposals.

If the employers fail to concede, strike action will escalate among bin workers from 10th May, leading to a complete shutdown of refuse collection.