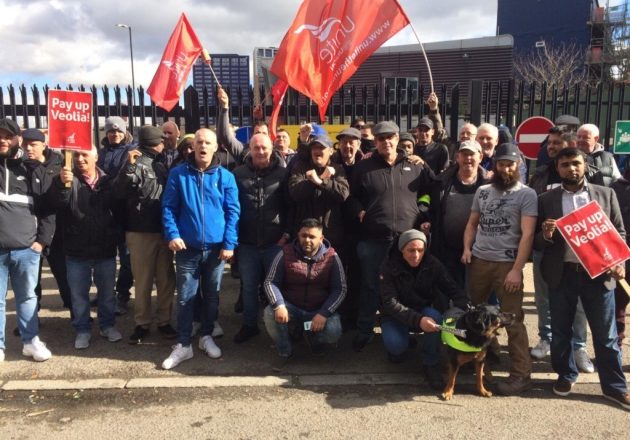 Despite the coronavirus, workers continue to fight back against the employing class.

Refuse workers in the East London borough of Tower Hamlets ended their strike on 24th March after days out. Their employer, Veolia, which sub-contracts to Tower Hamlets Council, had been denying holiday pay arrears and in some instances owed individual workers as much as £9,000. The dispute has been going on since August 2018, with Veolia forcing workers to engage in litigation in order to get their pay. A ballot in February resulted in a majority for strike action (96.5% of 70 % turnout) with 150 workers still being owed for holiday pay.

An initial eight day strike took place, with rubbish piling up in the streets. Workers then again went out on strike and in recent days 41 refuse trucks were put out of action in a Veolia yard by persons unknown.

Veolia’s refuse division made profits of over £1 billion in the first half of 2019 but the company went to great lengths to rob workers of their holiday pay.

Veolia came to an agreement with the Unite union under pressure of mounting piles of refuse during the Coronavirus on 24th March, although we are not at the moment aware of the details of the deal. The contract is being taken away from Veolia and returns in-house next month.

Refuse workers in the south east London borough of Bexley employed by the sub-contractor Serco went out on strike on Wednesday March 18th after they discovered they were receiving up to £4 an hour less than their counterparts in neighbouring Greenwich.

They returned to work after a guarantee of sick pay to any worker who had to self-isolate because of the coronavirus agreed by Serco and Bexley council. The well supported strike and the concessions won increased workers’ determination to continue the fight after the end of the crisis and to battle against zero hours contracts, lack of sick pay and low wages.

Refuse workers on the Wirral in Merseyside are voting in a ballot for a strike over better pay in a dispute with sub-contractor Biffa. Depending on the vote, workers may come out on strike immediately after the Easter holiday.