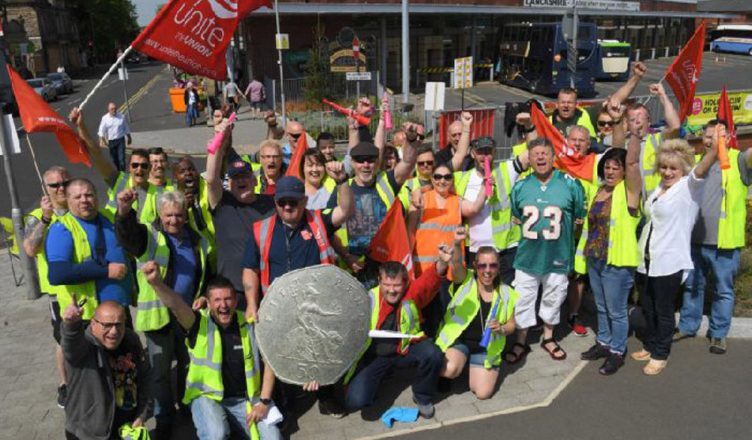 Stagecoach, the transport company, recently offered the insulting 3p an hour rise over three years to its bus and coach drivers. A strike followed with 150 drivers and their supporters gathering at Preston bus station on 25th June., with a similar number at Chorley bus station. They are prepared to strike for another 15 days this July.

Arriva operates a fifth of London buses in the greater London area. It is increasingly putting pressure on drivers to work on their rest days. This is not just a massive stress on them, but increases health and safety concerns over tired drivers lacking concentration and losing control of their wheels. At 15 bus stations, bus drivers voted overwhelmingly- 1,854 to 69 – to come out on strike. Watch this space for further news.

Plymouth Academy teachers and support staff went out on strike on 2nd July. They were demanding an end to management bullying. Management backed down and agreed to an anti-bullying policy and other demands. The workers have been treated abysmally, whilst some managers are trousering between £70,000 to 90,000 a year. 40 people turned out on the picket. This is something that needs to repeated throughout all the academies, schools and further education establishments

A one day strike on 28th June took place at Birmingham University supported by catering, cleaning and security workers. They were acting against the removal of payments for weekend and anti-social hours and the cutting of holiday entitlement by one week as well as the refusal of the university to become a Living Wage employer and the expectation that some stuff should start collecting work materials in their own time. Meanwhile the vice chancellor is pocketing £447,00 a year plus £80,000 bonus and other perks. This obscenity is insisting on a pay cut for his workers.

A 24 hour strike took place at Sainsburys Waltham Point distribution centre on 27th June when sick pay for 26 weeks was reduced to just 2 weeks. The warehouse workers responded angrily with a solid strike.

Over 300 workers-cleaners, domestics, porters, etc- at Bradford Teaching Hospitals NHS Trust went out on strike for 7 days starting 8th July against outsourcing. They realise that outsourcing will undermine their pay and conditions. Similar strikes in Wigan last year forced NHS bosses to back down, followed by other NHS trusts.

Also in Bradford, workers at Bradford College struck for 3 days in early July against 131 compulsory redundancies and low pay.

Workers at John Roan School in south east London went out on strike against plans to turn their school into a privately run Academy. This is the 17th strike so far, with further strike planned. They are supported by school students, parents and local residents. This decision to turn John Roan into an academy is being implemented by the Labour Council in Greenwich. How many times must we point out that Labour is no friend of the working class?

At nearby Peacehaven, workers at Peacehaven Community School went out on a strike last weekagainst plans to turn their school into an academy, Swale Academy Trust.

Workers at Drax power station near Selby in West Yorkshire went out on a 48 hour strike in early July for a 2.8 percent pay deal for 2018 and 2019. Further 48 hour strikes are planned.