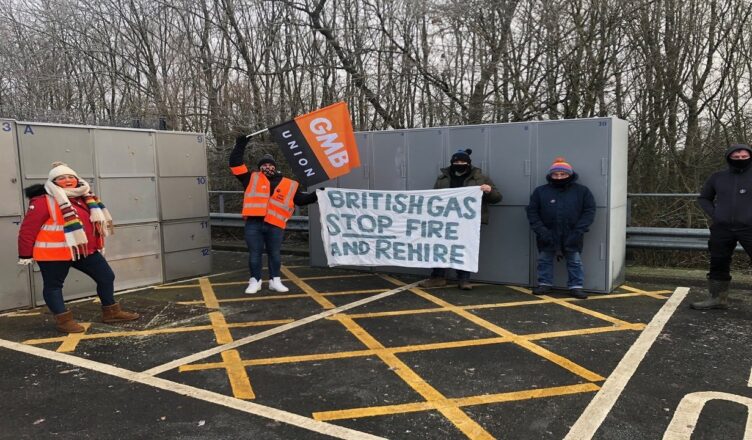 As noted in earlier articles here on this website, 7,000 gas engineers employed by British Gas took industrial action for five days between 7th and 11th January. A strike in February was suspended whilst talks went on between the GMB union and British Gas. However the employers refused to withdraw the fire and rehire plans which had sparked the strikes. Gas engineers have taken action from February 26th in a strike which will end on March 1st. There is widespread discontent among gasworkers that the GMB suspended the February strike. It is imperative that the gasworkers win this strike. If the employers succeed in imposing fire and rehire there, they will roll it out to other workers over the next year.

Bus workers employed by GoNorthWest in Manchester will be out on indefinite strike from February 28th. Last year they beat both an attempt by the employers to install fire and rehire conditions and a try at sacking a trade union representative.

Bus drivers employed by RATP have been out on strike between 22nd and 24th February. Two thousand drivers took part. They have taken action over pay and conditions, with some drivers facing a pay cut of £2,500 a year. The strikes have hit 80 services across west London. On March 3rd bus drivers in northwest London plan on coming out on strike.

As we noted in Workplace Notes on January 27th scaffolders at British Steel’s Scunthorpe plant went out on strike because they were being paid £2 an hour less than the National Agreement for the Engineering Construction Industry. Workers have now been on strike for five weeks, which started on 25th January. The contract is transferring to Actavo on March 1st which means strike action will end, pending talks with the new employer on 18th March.

Workers at University of East London

Support workers at University of East London went out on strike for two days this week to fight the plans of management to cut jobs via compulsory redundancies.

Teachers at Barrow Hedges School in Sutton went out on a two day strike. This follows a refusal by the school authorities to allow home working over concerns about the coronavirus. Four more days of strikes are planned.

Twenty security workers at the Royal Berkshire Hospital in Reading are out on strike until 7th March. They are demanding that the employers raise their wages from £9.30 to £12 an hour and are on strike until 7 March. This is the third strike they have mounted since mid-December.

Care workers and cleaners at the Sage Nursing Home in Golders Green, North London, organised in the grassroots union United Voices of the World (UVW) went out on strike in January and February in two three-day strikes to demand a living wage of £12 an hour, full sick pay and annual leave in line with NHS rates. The Central Arbitration Committee ruled in favour of the workers’ demands but management has not as settled.

Staff at Langley School in Birmingham went out on strike for a day on 24th February over concerns about Health and Safety around the coronavirus, as well as “unreasonable management practices”

Teaching support and school bus drivers at Colvestone Primary School and Thomas Fairchild Community School went on co-ordinated strikes between 8th and 12th February over job cuts and “restructuring” in the case of the teaching support staff, and over a one-off demand for a £500 bonus over health and safety issues for the bus drivers and passenger assistants during the pandemic.

School cleaners in the grassroots UVW union at La Retraite Roman Catholic Girls’ School in South London are planning 40 days and 40 nights of strike action from 16th March. The cleaners employed by sub-contractors Ecocleen are demanding statutory sick pay, the London living wage, improved sick pay, no reduction in working hours and against the deduction of up to a month’s pay after refusing to work after concerns over COVID health and safety.

IT workers in the referencing section of lettings platform Goodlord are on strike between 22nd February and 5th March over fire and rehire plans which would result in many wages being reduced by £6,000 below the London Living Wage.