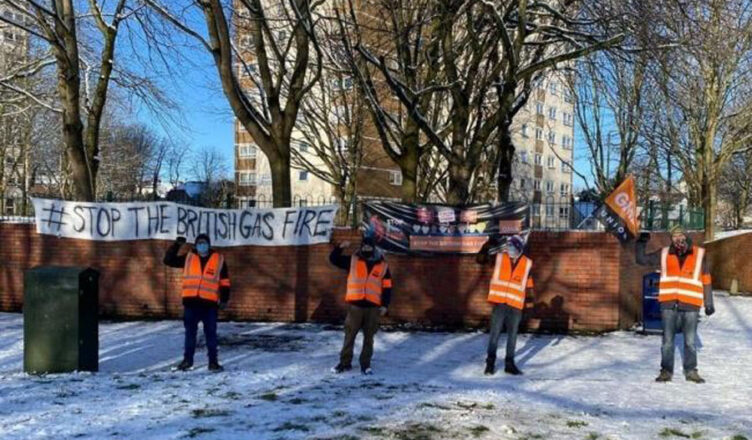 On Monday (25th January) 7,000 British Gas workers went out on strike for the eighth time. Their employer Centrica wants to have the right to sack and re-employ workers on worse contracts, undermining their pay and conditions. This would include hourly pay rates being cut by 15%. Last week workers were on strike Friday, Saturday and Sunday, where they burnt their new contracts.

The GMB union members were set to walk out on Monday, the third day in their second round of industrial action. They are fighting against parent company Centrica’s plan to sack and rehire many thousands of workers on worse pay and terms and conditions.

Centrica threatened workers back in July, when it warned that it would sack and rehire workers if they did not go along with new contracts. Huge pressure to sign the new contracts was put on workers via emails, texts and phone calls. When this failed, Centrica turned to bribery, promising a £2,500 transition payment and additional holiday leave if workers signed the contracts.

This pressure has created great stress among gas workers, and many have taken sick leave because of the stress.

Now Centrica says that if workers do not sign by March 31st they will be fired.

Further strikes are planned for January 29th, 30th and 31st, and February 1st. Demonstrations are planned outside British Gas office, including the head office in Windsor. A backlog of 150,000 customers has accumulated as a result of the intransigence of Centrica.

The gas workers union, the GMB, has dragged its feet on the attack by Centrica. Despite the announcement by Centrica in July, industrial action has only been called over the last few days, and despite two ballots with large majorities for strike action. Gas workers have to rely on their own grassroots action and should be very wary of the union bureaucrats who are sabotaging the strike.