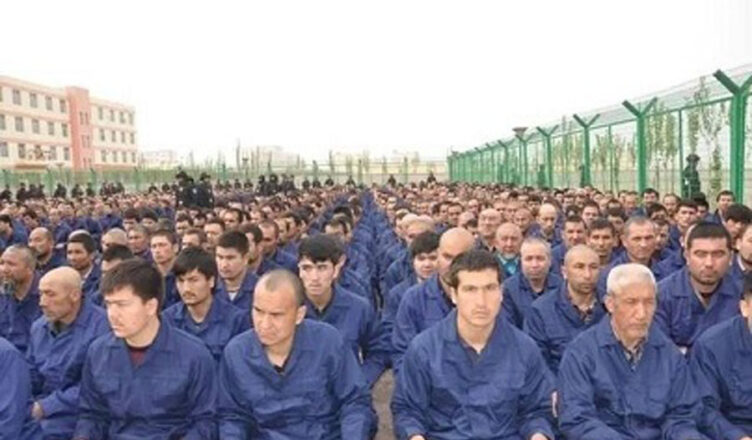 Xinjiang, or Chinese Turkestan as it was once known, has been a Chinese sphere of influence for many centuries. Lying to the west of China, it was through the oases cities that the silk route to the West ran. It was fought over by different Chinese dynasties in their wars with the Xiongnu tribal confederacy to the north, and then with successor steppe empires.

Xinjiang was occupied by the Uighurs, a Turkic grouping that has lived there from at least the 8th century. The area was declared an autonomous region after the establishment of the Communist Party’s People’s Republic of China in 1949. There are 10 million Uighurs in Xinjiang, most of them Sunni Muslims. In the 1950s large numbers of Han (ethnic Chinese) began to move into the area, leading to a rise of 21 million in the present day. As a result, the Uighurs now count as only 45% of the population. This immigration policy was a deliberate tactic by the Chinese government, encouraged by oil and gas fields in the region. Alongside Chinese workers are Chinese capitalists taking advantage of these rich assets. The economic boom that resulted did not noticeably benefit the Uighurs, as both state and private sectors tended to hire Han workers rather than Uighurs, based both on nepotism and discrimination.

As a result, the economic gap between Uighurs and Han has increased tremendously, fuelling resentment. To overcome this, the Chinese government encouraged, from 2002 onwards, Uighurs to move to the factories and building sites of eastern China. To both encourage this, and at the same time attack the Uighur language, courses in Mandarin Chinese were offered, as well as industrial training. Those who refused to move faced heavy fines. This has resulted in 1.5 million Uighurs relocated to other parts of the Chinese Republic.

The Chinese government has pursued a policy of sinification (making other cultures more “Chinese”), forcing Uighurs to abandon their language for Mandarin and give up other aspects of their culture. Mandarin is the only language spoken in Xinjiang universities, and the poverty of the lower classes of Uighurs has made learning Mandarin difficult. The Uighur language is regarded as “out of step with the 21st century”, by the Stalinist overlord of Xingjiang, Wang Lequan.

Islamic fundamentalists have taken advantage of the resentment against the Chinese government to spread their ideas in Xinjiang. The ethnic and economic tension in Xinjiang led to riots against the Han Chinese in the city of Urumqi in 2009.

From 2017 the Chinese government intensified its sinification programme and its attacks on Uighur language and culture. Detention camps were constructed, and now, up to 1 million have been imprisoned there. These camps go under the name of “re-education and training centres”. It is not just Uighurs who suffer in these camps, but members of other Turkic language groups like the Kazakhs and the Kirghiz.

In part this is a drive against practitioners of Islam, with those wearing beards or the veil being detained. Another aspect is punishment for links with family members and relations outside of China. At the same time, a purge of Uighurs within the local Communist Party, and among intellectuals, academics and literati has seen many of them ending up in the camps.

Conditions in the camps are rumoured to be harsh, with a fierce regime of indoctrination imposed there. Some face daily beatings, others face “self-criticism sessions” and the mind-numbing repeating of patriotic slogans. Things are not much better outside the camps, with many police and military checkpoints, indoctrination routines like raising the Chinese flag and forcing people to take oaths of loyalty to the “People’s” Republic. Video cameras dominate Uighur neighbourhoods as well as the constant presence of police patrols. Spectacles of military drilling are another sign of intimidation and repression. In addition, a policy of forced sterilisation appears to be being carried out in the camps.

The autocracy, ruling from Beijing, defends its imperialist policies in central Asia and Tibet by looking towards the cynical support of the USA and its allies, including Britain, for the Uighurs and Tibetans. It can then justify its policies by citing opposition to Western imperialism. It is joined in this by a chorus of assorted Stalinists and a minority of Trotskyists around the world, who in the name of anti-imperialism, dismiss the repression of the Uighurs as bogus, and thus defend the Chinese autocracy.

Anarchist communists should clearly show that they support neither Beijing nor Washington over the question of the Uighurs. We need to encourage and support international solidarity and attempts to stop arms sales to China at a grassroots level, including the refusal of dockers and seafarers to transport arms, which will be used against both the Uighurs and against future revolts of workers and students. Pressure needs to be exerted on corporate chains like Apple, Nike, Gap, Muji, Uniqlo, H&M, Esprit and Adidas who are profiting from forced labour in the Xinjiang camps. The region produces the majority of the cotton output in China (84%), and some of this is manufactured by forced labour. Other products coming out of the camps include human hair products.