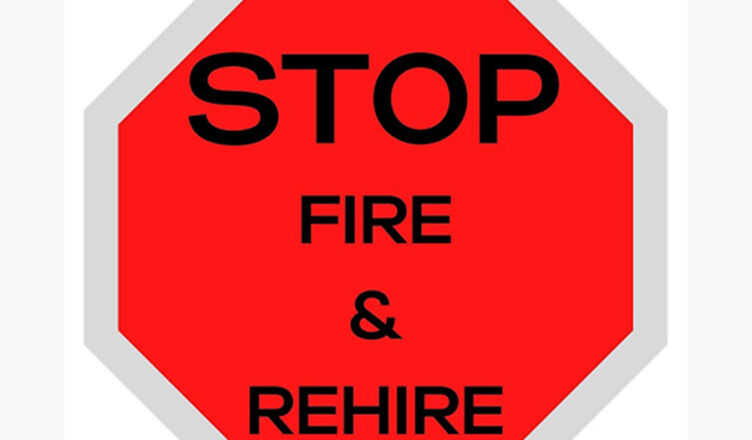 Bosses have seized the opportunity created by the COVID pandemic to opportunistically sack workers and rehire them with lower pay and worse conditions. We have reported on various struggles against this new tactic here on the ACG website. This includes British Gas workers, Go North West bus workers in Manchester, workers at British Airways, Douwe Egberts, the coffee company, Goodlord, who provide computer services to estate agents, ESS, which supplies cleaners and catering workers to the Ministry of Defence, NHS health workers in Birmingham and teachers in Loughborough. ASDA already pioneered such attacks before the pandemic in 2019.

The aim is to turn to zero hours contracts or contracts with short hours.

Some of the big hotel chains are now employing the same tactic and forcing workers on to shorter hours contracts. The TUC complained that nearly one in ten workers have now been told to reapply for their jobs with worse pay or conditions or face the sack. Almost a quarter of workers say that their pay and conditions have been under attack since the first lockdown in March 2020.

It’s worse among young workers with 18 per cent of 18-24 year olds saying that their bosses have attempted to rehire them on worse terms. Black and minority ethnic workers have been subject to fire and rehire at 15 per cent, nearly twice the rate of white workers at 8 per cent.

The TUC poll also revealed that 24 per cent of workers in the UK have suffered downgrading of pay and/or reductions of hours, with 34 per cent of young workers saying their terms and conditions have deteriorated since March 2020, with 30 per cent of low paid workers (those earning up to £15,000) stating the same. 38% of all workers consulted in the poll expressed fears about having a job in the coming year.

Despite these attacks, some workers are refusing to take this lying down as we have consistently reported. As well as bus workers in Manchester and British Gas workers, electricians have opposed deskilling at Balfour Beatty and NG Bailey, two of the biggest building firms. Care workers and Deliveroo drivers have demonstrated against gig economy conditions.

The ruling class is employing these tactics in order boost their falling profits and to attempt to cow workers and make them more subservient. However, discontent is simmering, not least among health workers who have been offered a derisory 1 % pay increase, which, with inflation, represents a pay cut.

We must, as workers, increasingly rely on our own self-organisation that goes beyond what the union bureaucrats propose. We know that worsening conditions are pushing workers to take action. Sometimes this dissidence is expressed in new theatres of struggle, as with the recent protests around football.

The decision to put forward the new Policing Bill at this time is not a coincidence. The Johnson regime, like other governments around the world, like Macron in France etc, are looking towards an increase in police powers in order to strengthen their response to forthcoming strikes, riots and uprisings. Now is the time for serious revolutionaries to intensify their propaganda and organisation.