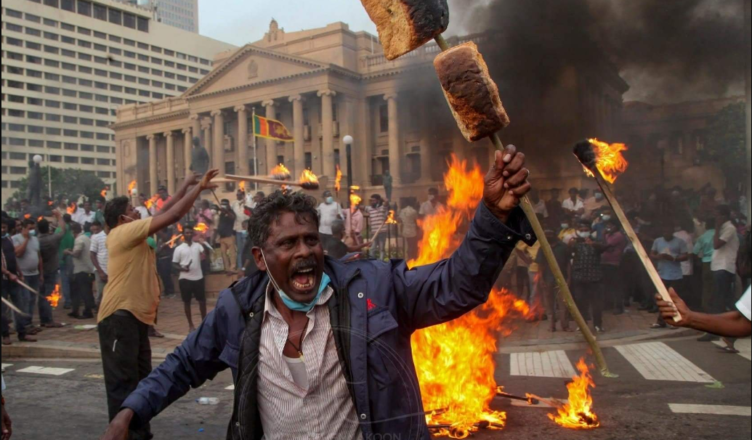 When you see a lawyer interviewed amongst a riotous mob of workers saying “yes I think the people’s uprising is going well,” you know the last people he wants to benefit from this are the working class! Bourgeois opponents of the regime will hope to ride the tiger only to shoot it when power is within their grasp.

Sri Lanka is teaching the world working class an important lesson. Since independence from the British in 1948, it has been a land of rebellions and social struggles, from the largely (majority) Sinhalese uprisings of 1971 and ‘87-89, to the minority Tamil revolts of ‘83-2009. Despite the questionable mentors of these rebellions (Maoism, Trotskyism and national separatism) they have harnessed a long-standing resentment by ordinary Sri Lankans, the workers and dispossessed, of nepotistic crony capitalism.

The price paid has always been workers’ blood, and betrayal by the manipulative elites of class, caste and religion in a land where even Buddhism wields a machete. The slaughter of defeating the Tamil Tiger personality cult of Velupillai Prabhakaran, consolidated the now two decades old Rajapaksa dynastic dictatorship at a cost in excess of 100,000 lives.

That today on the streets, ordinary Sri Lankans have again not just risen but defeated the proven repressive arm of their state is a major triumph born of courage as much as desperation. Already sick of the government’s family run business pocketing the nations treasure and selling off key assets – China bought an 85% stake in the country’s second port of Hambantota – to cover their financial mismanagement, the current world crisis is the final straw. Not only is the country short of necessities like food stuffs and fuel, the government squandering of its assets has robbed it of the foreign currency both to import and to subsidise the nation’s basic needs. Global capitalism and the ruling class are looking on in horror at the consequences this implies for them.

But while power lies on the streets, victory on them is not enough on its own. In the failure of every rising, again and again in Sri Lanka, has been its fundamental fault line – the historically successful division between the Sinhalese and the Tamil communities.

So far, the months of protest have been predominantly by the Sinhalese community. The Tamil minority largely in the north of the east have been noticeably absent. This could be a critical weakness as the Sri Lankan ruling class are adept at division and scapegoating. What stands out though, according to current soundings within the Tamil communities, is that despite the bloodshed, defeat, and continuing discrimination, they’re not looking on with hostility at events in Columbo and elsewhere.

One interview stands out to sum up their current perspective: “We respect their struggle, but we don’t see our struggles represented there.”

There, as everywhere, our class is weakened by division and false friends. The current crisis in capitalism is by its nature uniting in common cause in a struggle that teaches the necessity and joy of unity and strength.

Capitalism cannot save or heal the current conflict, it can only kill or be killed. Victory on the streets must lead to victory of the united struggles of the whole working class! Let’s feel the onlookers tremble.