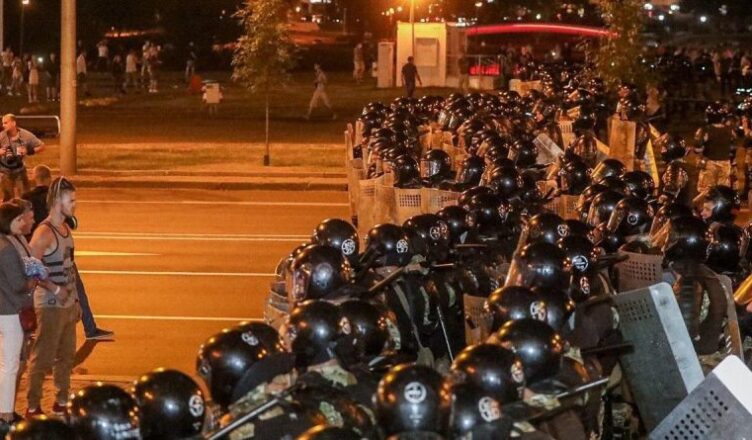 Alexander Lukashenko has been dictator of Belarus for the last 26 years. Moving from being a Stalinist bureaucrat to politician in the mold of Putin he has been able to accrue a vast fortune worth £6.86 billion. He sold off various state-owned assets, in 2011, selling Beltransgaz, Belarus’s gas piping network, to the Russian state company Gazprom. He’s acted as a wily spiv, looking both to Western and Russian buyers to flog off the privatised industries. At the same time he has waged war on the working class, via attacks on pensions, wage cuts and other austerity measures.

This strutting and vain dictator has further raised his unpopularity by claiming that the coronavirus is fake, and that the best thing to do to stop its spread was to drink vodka and go to the sauna. He has derided any attempt at social distancing, in the style of Bolsonaro and Trump.

Following the fixed election in the first Sunday of August where Lukashenko claimed 80% of the vote, tens of thousands of demonstrators gathered in 33 cities around Belarus. They were met with police violence, with the use of tear gas, stun grenades, water cannons and rubber bullets, and over 5,000 arrests during the continuing protests. At least four demonstrators have been killed. In addition Twitter was censored and the Internet more or less closed down.

This particular election was a little different in that Svetlana Tikhanovskaya, the wife of an arrested opposition politician, ran against Lukashenko. Her demands were “free and fair elections” and democracy, the freeing of all political prisoners, a move away from the close relation with Russia, and a return to a President only being able to serve two terms. She was supported by other opposition politicians, Babaryka and Tsepkalo, who are advocates of the free market. They originated in the Belarusian state bureaucracy. These right-wing free marketeers are being supported by both the EU and the United States, in a similar way to how the relatively pro-Soviet regime was overthrown in the Ukraine by the Maidan movement.

Both the EU and the USA want to open Belarus to the free market and further privatise its economy. Meanwhile Putin gave his support to Lukashenko and reminded him of the proposed political and economic union between the two countries.

However, relations between Belarus and Russia are not as cordial as they once were. Lukashenko has been riding two horses, on one hand welcoming closer relations with the West, whilst at the same time fearing a Maidan style overthrow of his regime. He is engaged in a dangerous game, hoping for a deal with the West if it maintains him in power.

In the past, Lukashenko received reduced prices for natural gas and crude oil supplied by Russia. The change in the economic situation and the fall in oil prices forced Russia to stop these subsidies. Lukashenko either moves closer to the Russian Federation, which is viewed as unpopular in Belarus with Russia seen as a former occupier, or cut a deal with the West, which would bring down Putin’s wrath on him.

As the Anarchist Black Cross of Belarus explain:

“Lukashenko explained that it is due to economic problems that that Belarus can’t afford any quarantine measures against the coronavirus. If at the beginning of the epidemic the dictator was still shouting that the Belarusians would be able to avoid getting infected by work in the field and visiting the sauna, a month later he had to admit the real reasons for the lack of quarantine.

“The coronavirus proved to be one of the most serious challenges for the Belarusian dictatorship, which it failed. Instead of typical populism and care for their people the authorities left the population on self-sufficiency.

“Medical care in Belarus is nominally free of charge, but many services have to be paid for, as there is not enough money from the budget for drugs and medical equipment. It was impossible to test for coronavirus in many cases. Many could not afford to stay home and go to work. It is difficult to assess the real scale of the Coronavirus epidemic in Belarus. The state is the only institution that has real figures, and these figures are kept secret. In addition, many cases of coronavirus were labelled as pneumonia, including fatal.

“In order to maintain medical care, small businesses and a large number of ordinary people have, in fact, engaged in decentralized support of medical staff. Some restaurants and bars prepared food for the medical staff from the donations made by city dwellers. As in other countries, grass-roots initiatives produced protective masks. Taxi drivers transported medical personnel without payment. A few months later, many people had the feeling that the state had abandoned them. But, on the other hand, there was a sense of solidarity, the certainty that neighbours, friends and even strangers from the Internet would not leave you in trouble. This feeling has restored to Belarusians the importance of the public as opposed to the state. Solidarity has become not just a word, but a direct practice.

“And if in many countries, which were under the impact of coronavirus, with the fall of the number of infected, solidarity began to fall, in Belarus the structures of solidarity continued to work in other spheres as well. For example, in June, half of Minsk lost access to clean water. And while officials insisted that there was no problem with water, residents of the districts with water were organizing and delivering water to the neediest parts of the city.

Thus, one of the most important results of the coronavirus (the epidemic did not end in the country) was the growing awareness of the collective strength and the results that can be achieved through joint actions.”

Protests over the rigged elections, coupled with the effects of the pandemic, were a spark that ignited the simmering discontent against the regime. On August 10th, barricades appeared in the capital, Minsk, for the first time. Resistance against police attacks is increasing.

“For two hours in the centre of Minsk and other cities people were fighting against the Belarusian authorities. They fought with great energy, which they had been saving for so many years. The successful confrontation shows once again the fragility of the Belarusian dictatorship. The movement itself today is not the traditional political parties that lead the Belarusians to a bright future. Protests are organized through media platforms and have no clear leaders. Groups of people gather in the streets and decide on the way to go. The lack of a clear plan may hinder the effectiveness of the protest, but the lack of clear leaders makes it impossible to suppress easily.”

It is hard to predict the outcome of this revolt, whether it will develop along revolutionary lines and draw in the Belarusian working class more and more, whether this will be part of a move towards integration into the free market, or whether Putin will intervene aggressively. At this stage it is vital to support any revolutionary development and our anarchist comrades in Belarus.