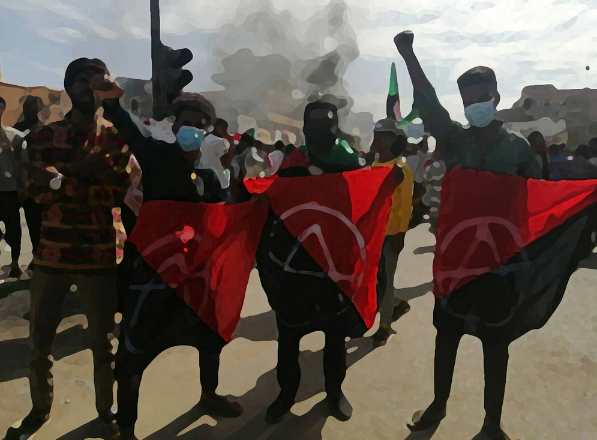 The military and police have also started mass arrests of members of the grassroots committees that have sprung up in response to the coup.

As a result of the uprising, the Prime Minister Abdalla Hamdok, was forced to resign, as it became apparent he had no popular support and was merely a puppet of the generals led by Abdel Fattah al-Burhan. They had ousted him during the October coup but then reinstated him a month later, hoping to head off the mass movement. This proved unsuccessful.

The generals acted on October 25th to preserve their wealth and power. They were afraid that a transition to a civilian government would mean investigations into their previous atrocities during the popular uprising in 2019.

The police have taken an active part in the repression against the popular uprising, even traffic cops taking part in firing on unarmed demonstrators.

Meanwhile the local committees that have sprung up during the uprising have organised both the demonstrations and the functioning of essential services. That is why they are being targeted.

Meanwhile the various political parties are attempting to derail the mass movement. These include the Forces for Freedom and Change who seek to reach a compromise with the generals. The Umma Party, an Islamic centrist party, is part of this coalition. The resignation of Hamdok has shown that the Sudanese masses are not prepared to play that game and are looking for the defeat of the generals.

The USA is concerned about the situation in Sudan, fearing increased instability in the region. That is why the Biden administration suspended $700 million in aid and the World Bank suspended $2 billion of aid. The US is seeking a “democratic transition” that would let the generals off the hook for their massacres and not threaten their wealth and power.

It appears that anarchists are active in the resistance committees in the capital Khartoum and in Port Sudan (see an interview with Khartoum anarchists here).

The previous mass uprising in 2019 was defused by the negotiations with the military carried out by the moderate forces. That this has proved to be a failure has been demonstrated by the October 25th coup.

The resistance committees need to be strengthened and mass civil disobedience and general strikes need to be further organised. Any compromise with the generals can only lead to the continuation of the horrendous present situation.