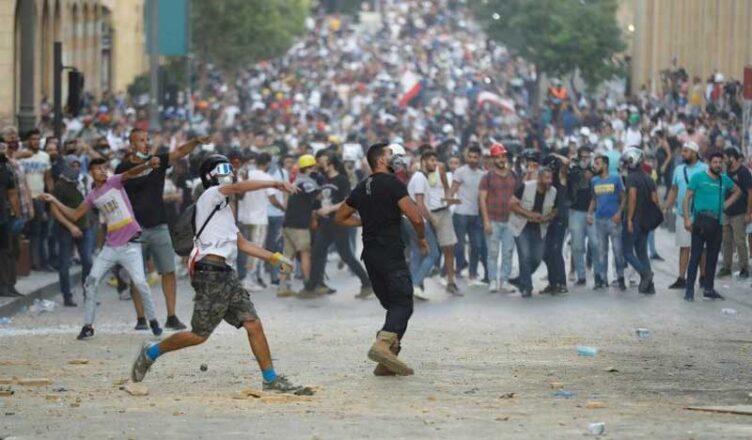 On August 5th a massive explosion tore through Beirut, the capital of Lebanon. Thousands of tonnes of ammonium nitrate, which had been stored at the port for years with no safety measures, were ignited. More than 158 people died as a direct result of the explosion, several thousands were injured, and more than 300,000 were made homeless as a result of the devastation. The grain silo that housed most of Lebanon’s wheat supplies was vaporised. Rich and working class neighbourhoods were torn apart, including those that served as homes for the many Syrian refugees that have flooded into Lebanon.

As we have previously reported Lebanon has defaulted on its massive debt payments to foreign creditors, and the regime of Hassan Diab wanted to make the Lebanese masses pay for this with a “rescue” package. The Lebanese pound plummeted to half its value since October. The Lebanese economy ranks among the most indebted in the world. The Diab government was the puppet of the Hezbollah Shiite militias, themselves backed by the Iranian regime and Syrian regimes, and the various billionaires of the different sects in Lebanon. The financial crisis has been aggravated by the coronavirus pandemic and by American sanctions against Hezbollah.

Diab was forced to resign on August 10th, following the mass protests of the Day To Settle Scores which brought out thousands on the streets from August 8th onwards. Official buildings were attacked, ministries occupied and demonstrators wore photos of Lebanese politicians hanging from a noose around their necks. Diab requested that new parliamentary elections be held as soon as possible.

All of the imperialist powers want their share of influence in Lebanon, at the head of which is France, with long-term interests in the country. All of them have queued up to offer material and financial support, with strings attached – France, the USA, the United Arab Emirates, Turkey, Israel, Saudi Arabia, Russia and Iran.

The Lebanese masses will probably not be distracted by another parliamentary farce, as there is a growing realisation that none of the confessional parties, whether Druze, Maronite Christian, Shiite, all of them representing the corrupt elite, can answer their problems. Neighbourhood committees are being created, waste is being recycled, first aid is being set up, as is the founding of schools of popular education, and systems of food supply under the control of the masses. As a radical quoted in Freedom News said:

“I went today with a bunch of comrades to help people on the streets to clean up the mess. What did I see? Only pure solidarity and mutual aid. People helping each other, giving free food and water. Workers – plumbers, carpenters, etc… – proposed to offer their labour for free. Immediately after the bombing, social media was flooded with posts saying “if anybody needs shelter, I have a place, please don’t hesitate” because 300,000 were homeless.

“What did the State do? Nothing. The cops were looking at us. A friend asked a policeman for help. ‘We’re only following orders’. Yeah, fuck you too. Not a single soldier, not a single policeman, not a single statesman has helped, people were helping themselves.

“This is it, I have become an anarchist.”
(see freedomnews.org.uk/interview-mutual-aid-in-lebanon-in-the-wake-of-disaster/ )

The struggle in Lebanon is the same as the struggle in Palestine, Syria, Iraq, Iran and Sudan and there is also a growing realisation about this. The various revolts developing around the world are increasingly seeing a common sense of purpose. It is perhaps rash to predict a new revolutionary period but it seems increasingly like one. The development of international solidarity is increasingly relevant.

The Beirut explosion was the culmination of the process of social disintegration going on in Lebanon. Only the masses can build a new society, they cannot rely on the venal and corrupt elites. As the Spanish anarchist Durruti said: “The bourgeoisie might blast and ruin its own world before it leaves the stage of history. We carry a new world here, in our hearts… That world is growing in this minute.”

Information on the unfolding situation in Lebanon can be found at the Facebook page of the Lebanese anarchist group Kafeh! (Struggle!).