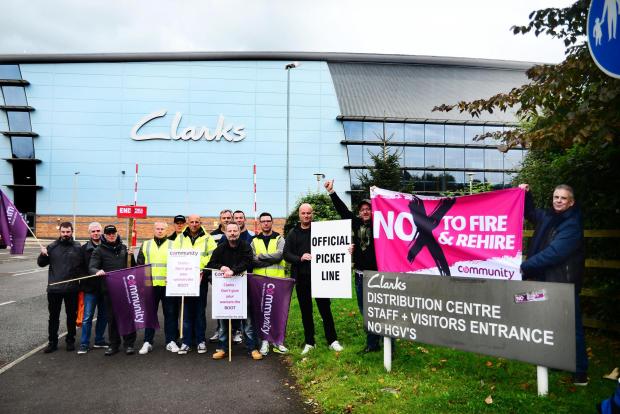 Over a hundred workers at the main distribution warehouse of Clarks Shoes in Street, Somerset have been on strike for over two weeks. Clarks is planning on cutting wages by almost 15% from £11.16 an hour to £9.50 an hour by using fire and rehire.

Workers have been told that they have to sign up to new contracts or lose their jobs and any redundancy pay. In addition, Clarks is planning on cutting sick pay from 13 weeks to six weeks, reducing its redundancy package deals, and scrapping paid breaks. The last measure would mean that workers would work an extra 2.5 hours a week. As well as this, Clarks are proposing a pay freeze for four years, and a cut in overtime rates.

Clarks was taken over by LionRock Capital, a private equity firm based in Hong Kong, in March.

There is massive solidarity in Street for the strikers. Postal workers have refused to cross picket lines and local people have sent food packages to the strikers on a daily basis. Firefighters, council workers and train drivers have joined the picket line. Meanwhile local Tory MP James Heappey said that strike action “was not the way forward”.