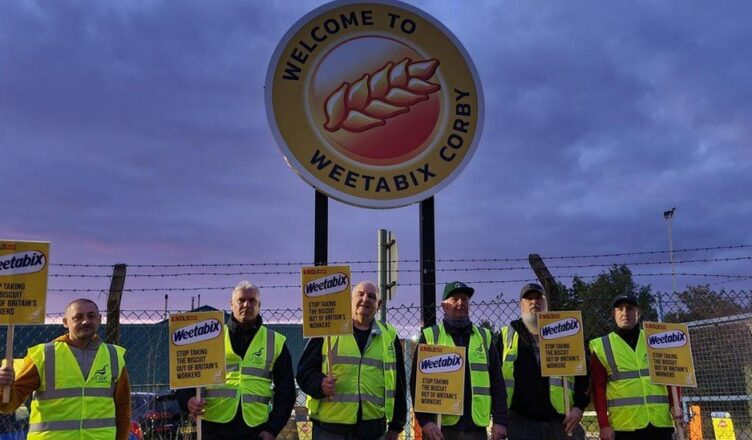 Engineers at two Weetabix factories went out on a two-day strike in late September. The workers at Kettering and Corby came out over fire and rehire proposals from the bosses which would mean a loss of up to £5,000 a year. In addition, the bosses have proposed a move from a regular Monday to Friday working week to one involving weekend work.

The engineers are planning on continuing their two day strikes until the bosses back down. The engineers continued working throughout the pandemic, whilst office workers were allowed to work from home. Originally the workers were planning on striking from June to September, but the unions called for talks with the employers. A few concessions were given, but engineers felt they were not enough and voted by 82% to reject them.

It’s not as if the Weetabix bosses are suffering. They increased profits by 18.5%, a massive extra £82 million. Weetabix is now owned by the US company Post Holdings.

In addition to the fire and rehire moves, engineers are under pressure to do the work of two, threatening health and safety. The most effective way to victory would be to escalate the strikes, moving from two-day walkouts to all out strikes.

The union bureaucrats of Unite and USDAW have dragged their feet on supporting the workers. The defeat that workers at Jacobs Douwe Egberts (JDE) suffered recently over fire and rehire, where workers were betrayed by Unite union leaders, must not be repeated.