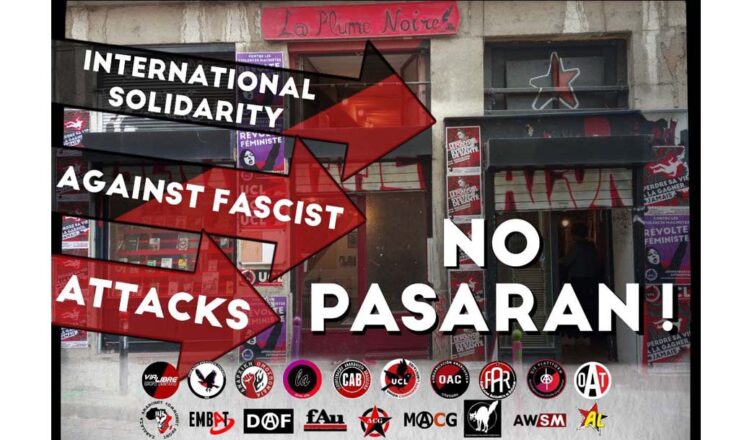 The ACG extends its solidarity with the comrades of the Union Communiste Libertaire after a fascist attack on their social centre in Lyon.

The Anarkismo network relays the communiqué of the Lyon group of the Union Communiste Libertaire (UCL), an organisation active in France and Belgium and which is a member of the network. We express our solidarity with our comrades in Lyon and relay their communiqué and their call for financial solidarity.

Fascist attacks will not stop us!

Our bookshop, La Plume Noire, located at 8 rue Diderot, was once again the target of an attack by about fifty masked and armed fascists. The attack took place at 2pm on 20 March, at the opening of our bookshop’s office and that of the PESE association for the collection of basic necessities. Less than 10 people were inside at the time of the attack. The attack was cowardly and violent, as is the manner of Lyon’s far right. Fortunately there was only material damage and we hope that those present will recover quickly from this attack.

There is no doubt about the origin of the attack: it is the far right in Lyon, particularly the identitarian far right, allied to the stadium Nazi hooligans. The chants that can be found on certain videos and the Nazi salute leave no room for doubt. This aggression is necessarily linked to the dissolution of Génération Identitaire and our demand, along with other organisations, for the closure of their premises in the Traboule and their gym, the Agogée.

On the other hand, we are once again astonished (actually not so much) at the ease with which 50 hooded and armed fascists could cross several districts of the city, attack a local at 2pm on a Saturday and leave without being hassled by the authorities. We even heard from the police that the group of 50 had been followed via surveillance cameras but not arrested because there were not enough people!

As in 2016 and December 2020 (assault of PESE volunteers in front of the Plume Noire), a complaint has been lodged. We don’t expect anything from it but it was necessary to reopen as soon as possible.

See you soon in the struggles! No Pasaran !