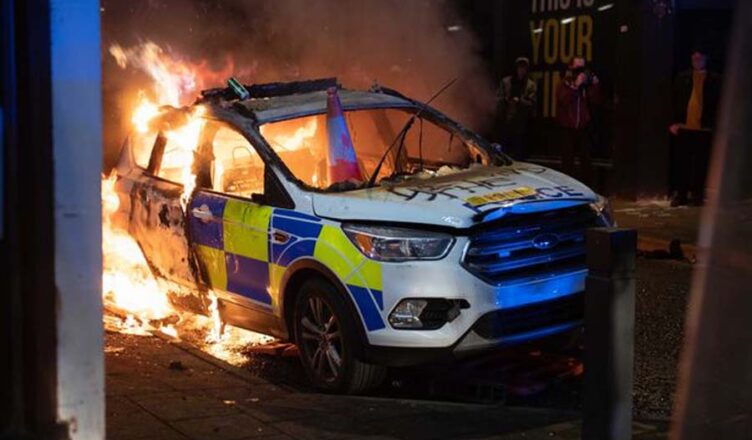 So, last night, it all kicked off in Bristol, and the media, politicians, the great and the good all line up to say just how terrible it was that people didn’t passively take their beating from the cops, and isn’t it a disgrace that those Bristolians responded to such attacks from the police with violence, etc.

The BBC (aka “His Master’s Voice”) and all the other big media outlets will now be going into a frenzy, trying to build a media narrative that speaks of good protesters versus the bad ones. Meanwhile, the pathetic Labour Party will parrot this same narrative, as will some more liberal elements who don’t like the policing bill… but don’t like to see people making the wrong kind of fuss about it. To see how this is done, check out the Anarchist Federation’s article, what actually happened in Bristol – and how a narrative is built.

Well, just in case anyone’s in any doubt, take note of what the comrades of Bristol Solidarity Federation have to say:

“Some things for Bristolians to remember tonight:
There was a vigil for a victim of police violence in London last week. It was peaceful. The police attacked it anyway.
Tonight we saw police with batons attacking a peaceful crowd. The only reason this turned into a riot is because people fought back.
If you’re worried about violent protesters but not police violence then you’re doing the cop’s work for them.
If you blame protesters for the violence that the police inflict on the public, then you’re blaming the victims.
It’s not a fair fight when one side uses stones and fireworks and the other uses batons and tear gas. “demonstrators clashed with police” is media speak for “armed people attacked an unarmed crowd”.
If you only support a cause on the condition that activists are well-behaved then you don’t really support that cause.
Politics is about power, not popularity. Winning public support is meaningless when our enemies don’t even listen to the public.
They can ignore a protest. They can’t ignore this.
We chose to be combatants, not victims. Fuck the police.”

After the debacle (and subsequent police/government embarrassment) last weekend, of the Metropolitan Police violently suppressing the peaceful Clapham Common vigil against violence against women and femicide, the government announced that it was putting the bill on hold. But putting something on hold is not the same as scrapping it completely, and the government will wait for the optimum time, when opposition or resistance is low, or when there’s something else big in the news headlines, so they can quietly make this bill law.”

Make no mistake, the Police, Crime, Sentencing and Courts Bill is a draconian attack on basic rights to protest in the UK. It will mean a massive police clampdown on any one who dares to protest, and if you do protest, there’ll be mega fines and ten-year prison stretches. And whether that protest is peaceful or whether people resist violently, it’ll be all the same to this government.

This is a bill straight out of the authoritarian, totalitarian and fascist playbook – the only difference being, it has that lovely liberal ‘protect our nice democracy’ slant to dress it up. So, in this way, the Johnson regime, with Priti Patel leading the charge, is acting in the same mould as China with regards to Hong Kong, Putin with opponents in Russia, Erdogan in Turkey, Bolsonaro in Brazil, Orbán in Hungary, and every other type of ruthless, dictatorial and controlling little shit from the year dot.

This weekend, in a number of towns and cities (including Bristol, Brighton, Cardiff, Manchester, Birmingham and Newcastle) there were demonstrations against the Police, Crime, Sentencing and Courts Bill. Some of these demos passed off peacefully, and that’s fine; Bristol didn’t, and that’s fine too. What’s important is we resist.

But we must resist this bill together, as a class, and we need to be building that resistance now. That means setting up local campaigns in every town and city in the country. That means talking about it to people at work, in your neighbourhood, and working with people we might not necessarily agree with on some things. It’ll mean calling for and organising local meetings and demonstrations in your area. Let’s get to it!