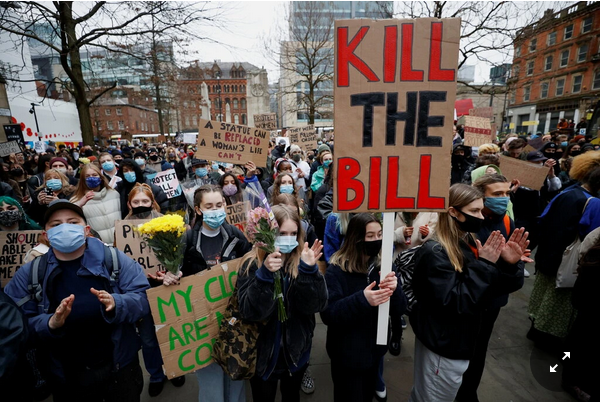 But keep up the pressure

The Policing Bill which has sweeping powers to close down demonstrations and protests and criminalise Travellers, Gypsies and Roma, has now been postponed. After the large number of demonstrations throughout the UK, as well as widespread revulsion expressed through social media, the Cabinet overruled Priti Patel and assigned the bill to a committee that won’t meet until June. When the bill reappears, it will probably be much amended. The Home Office confirmed postponement with the following mealy-mouthed statement, “The government is pleased that the Bill was given a Second Reading on Tuesday by a large majority.” As we are approaching the end of the current session, the House of Commons agreed to carry over consideration of the Bill to the next session. “Given the size of the Bill, it is right to allow time for MPs to consider the detail before starting their line-by-line scrutiny.”

It could be argued that the bill itself is the sign of an insecure government, wanting to batten down the hatches, to shut down any real opposition, using the Covid crisis as an excuse, and there will be some truth in this. However, there’s also the view that it’s an indication of the swagger of a government that’s got it made and has basically been given the keys to the dictatorship. Already, this is a clearly corrupt government with a massive parliamentary majority; one that that publicly and openly lies on a daily basis, with little or no comeback from the mass media or the opposition Labour Party. With such a compliant media and virtually zero criticism in parliament from “Her Majesty’s Loyal Opposition” Labour Party, and in spite of 130,000 Covid deaths, this government seems virtually untouchable… for now.

This bill will be back. Although, no doubt there’ll be some watering down. And this is a fairly standard tactic – begin with the “dial up to 10” scary stuff, then after the subsequent furore, turn the scary stuff dial down to 8 (which is still incredibly scary). In the case of the Policing Bill, the second attempt is likely to include boosting prison sentences for those who commit rape and violence against women. This would pretty much ensure Labour Party support, especially as Starmer and his acolytes have never been too concerned about the civil liberties aspect. Also expect the Policing Bill Mk II to retain most of the draconian no right to protest elements, although maybe slightly reducing the suggested 10-year prison sentences for protesters who upset someone by being a bit loud. It would most likely also keep all the vicious attacks on Gypsy, Roma and Travellers. Shamefully, this last would be highly attractive to the popular press and the more bigoted and racist members of the UK population.

Both Priti Patel and Met boss, Cressida Dick, are supporters of the Bill. They want to close down all protest, be it strike pickets, Extinction Rebellion demonstrations, or protests against gender-based violence; they want to clamp down on the lives of Gypsy, Roma Travellers. Only large numbers turning out on the streets to show our anger against this Bill can stop it. We cannot rely on the Labour Party, which was prepared to abstain on the Bill before being forced to vote against it as the result of the Clapham events.

The Johnson government will have some concerns that opposition to the Policing Bill will trigger further waves of unrest. Thirty-one years ago, on 31st March 1990, large numbers of people fought the police in Trafalgar Square over the Poll Tax and helped bring down Thatcher. So, Johnson and his cronies would be right to be worried that a similar scenario could develop.

Although the bill is on the back burner, we shouldn’t be complacent. We have to ramp up pressure against the Policing Bill, with street actions and the creation of anti-Policing Bill alliances built at the local level. We’ve already seen demonstrations in a number of cities, including the brave resistance to the police in Bristol. There’ll be more of this to follow.

Now we have to build a mass movement.