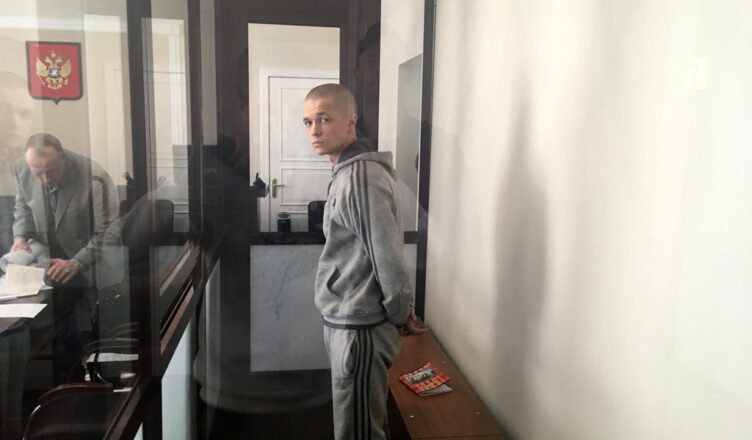 “Now and then the flame dies down, but solidarity is a stream of sparks”

ILYA SHAKURSKY, an antifascist political prisoner in Russia, appeals to you in this interview to write to him, and to others imprisoned in the infamous “Network” case. Please see a note at the end about where to send messages.

Tuesday 19 January, was the anniversary of the assassination of antifascists Anastasia Baburova and Stanislav Markelov, who were shot dead in broad daylight in central Moscow in 2009. People gathered, in Moscow, to lay flowers at the place where they were killed, elsewhere on line.
The “Network” case began in Penza and St Petersburg in October 2017, when the Federal Security Service (FSB) started detaining young anarchists and antifascists, who had supposedly participated in a terrorist group. The security services claimed that the young detainees were preparing terrorist acts, aimed at the presidential elections and the football World Cup in 2018 [which was staged in Russia].

It soon became clear that this “Network” organisation had been dreamed up by the FSB, and the confessions extracted from the alleged participants with the use of the most barbaric tortures. Details of the methods used, including electric shock batons, were published widely before the defendants were tried.

Nevertheless, the defendants were found guilty and sentenced – in January 2019 in St Petersburg, Igor Shishkin to three-and-a-half years’ detention; in February 2020, seven defendants in Penza, including Ilya Shakursky, to between six and 18 years; and in June 2020 in St Petersburg, Viktor Filinkov to seven years and Yulii Boyarshinov to five-and-a-half years. In October 2020 an appeal by the Penza defendants was heard and rejected. An appeal by  Viktor Filinkov is in progress. All ten defendants are included in a list of 61 political prisoners compiled by Memorial, Russia’s largest human rights defence group.

This interview with Ilya Shakursky, who is serving a 16 year sentence, is by Dmitry Semenov. It was published by Free Russia House, an “alternative embassy for Russian civil society” based in Kyiv, Ukraine, and by the Rupression collective that supports the “Network” case prisoners. (The questions were sent via Yelena Shakurskaya, Ilya’s mother, and answers received, via Yelena, in written form.)

Question: Do you feel the support from outside the prison system, and how important is it? Could you say something briefly to our readers and to people who support you?

Ilya Shakursky: It feels good to realise, every morning when they call out my surname and hand over letters I have received, that people remember me and continue to support me. At those moments, the grey monotony of imprisonment is broken up by different colours. It doesn’t matter whether the letter is a couple of lines or goes on like a whole essay. Just getting some news gives me strength and happiness. When I see photos of solidarity actions all over the world; when I read interviews with well-known people who speak about the absurdity of the criminal case against us; when I hear the drums and voices of friends [demonstrating] on the other side of the [prison] wall; when I think of the concert, at which the whole hall sang “It Will All Pass” [“Vse proidet”] (a song by the Russian punk group, Pornofilms, about the “Network” case), or of the rap-battle, where verses were read in support of our case, or of the street artist who used graffiti to speak out about repression in Russia today – I feel like it wasn’t all in vain.

If this means that people start paying attention to things that were previously out of their reach, or unclear, or that they didn’t need to think about – then this could become a way in which everyone can contribute to the struggle against the absurdity, the violence and the injustice. Now and then the flame dies down, but solidarity is a stream of sparks, that stops them from putting the fire out all together, that stops us losing heart – or, to put it another way, stops us from bowing our heads and submitting to evil.

If any of you suddenly thinks of writing to a political prisoner, don’t abandon that thought. Don’t hide it in your “to do” list among your other worries. Do it, right at that moment. Write about your dreams, about what you love, share some memories that make you laugh, or your impressions from a book you have read. Please be assured that your letter is more important than it can seem to you. It can save a political prisoner from the awful monotony of another day behind bars and walls. And that really is very important.

I am very grateful to each and every person who supports political prisoners, who fights for their release, and for justice, and who conveys those sparks that light the fire, that prevent evil from consuming our lives.

Question: After you heard the verdict, and the long, severe sentences, at the court of first instance, how did you react? What has helped you not to give up, not to be overcome by depression, to hold on?

Ilya: When I heard the sentences being read out, I took them as final confirmation that this was nothing more than punishment for recalcitrance. It’s difficult to believe what’s happened, and even now I try not to dwell on it. Such thoughts can gnaw away at you and drive you out of your mind.

We live in a world where the life of any one of us can be destroyed, on the whim of those who have power in their hands. What’s most terrifying of all is that people get used to this – to everything that is happening now: demonstrators and young politicians being beaten up; criminal cases under terrorism laws being opened against under-age children; the poisoning of undesirables, absurd sentences, and much, much more that is unjust, cruel and brutal, that could become the norm, if society just accepts it as the new reality. I fear that, above all.

Really, that would be totalitarianism with the silent acquiescence of the majority. And then it might be too late to start saying that that was not what we wanted.

I admit, honestly, that holding on, not getting depressed, gets harder. Especially in the context of what is happening in the country. But I am still alive, I have friends and family waiting for me outside these walls, they believe in me and sincerely love me – and so I have to hold on. I must not give up, for the sake of those people who are dear to me, for my own sake, for the sake of the stars in the sky and the fresh air, for the sake of freedom and love.

With smiles they were breaking my wings,

And I was numb from pain and helplessness,

And could just whisper: thanks to be alive!

Question: You practically all received exactly the sentences that the prosecution asked for – evidently, in large part because you refused to admit guilt and you publicly denounced the torture. With the benefit of hindsight, do you now regret that?

Ilya: To regret the course we have taken would render worthless all that we have lived through, and are living through now. The very worst time for me was when I gave up to weakness and fear, and betrayed myself by doing so. I felt that I had just stopped being human; hatred for myself overshadowed all my thoughts. But today, although I am in prison, actually behind four walls, I now remain the person that I really am. If I had [approached the trial] differently, my life would have been mere existence. Why talk about freedom, equality and fraternity, and then betray all of that? What would these words mean for people, if each one of us could just turn our backs on them when the executioners demand it?

The more that people betray themselves and others, the more often they carry out criminal orders in spite of their conscience, the sooner we will all become slaves, deprived of our free will, whose lives are mere existence.

Maybe I am guilty for silence,

At moments of fear and desperation

My guilt can be hidden.

Even from those who are indifferent.

But I am constrained by my conscience.

That’s what calls on me at times

Not to shut my eyes to evil

And to stand by those who suffer.

Otherwise, the burden of guilt will suffocate us.

Question: If you could make time go backwards, and return to some point before your arrest,would you change anything cardinal in your life?

Ilya: I already look at my past from a different, probably more grown-up and aware, viewpoint. So of course there are things in the past I would like to change. For example, I would value more highly the people around me, not make mistakes or take wrong turnings, be less bitter, less naive – and much else, maybe some completely personal stuff. But I take my fate as it is – although of course there’s much I could regret, as there is for many people.

My behaviour, my mistakes, my action and my views and aims made me what I am now. That’s what makes our lives interesting, full as they are of happiness and pain, of light and dark. All the more often now, I realise that I took the road leading in the necessary direction.

When I see those who hate me – Nazis, propagandists, Chekists [i.e. those in the Russian security services], thugs – and those who support me – the defenders of Shiyes, musicians, artists, political prisoners, teachers, people from my town, comrades all over the world, family and loved ones – I understand that I am on the right side, the bright side. And that understanding justifies, in many ways, the road I have taken, which is short but from which I have drawn definite conclusions and ideas.

What’s there to say about life? That it turned out to be long.

Only with grief do I feel solidarity.

But whilst my mouth is not yet packed with clay,

It’ll only resound with gratitude

Question: Finally, I would ask you to formulate some sort of phrase or slogan that in the current situation helps you to overcome all the difficulties and to believe that justice will soon be achieved.

Ilya: When I write that good will prevail, I don’t have in mind worldwide peace, however much I would like that. The point is that good prevails every day, thanks to sincere, good people. Good prevails when doctors save people’s lives, when people adopt a child from an orphanage, when a taxi-driver saves a demonstrator from sadists with truncheons, when eco-activists defend forests from destruction, when political prisoners are released in court, when human rights defenders protect prisoners from torture, when solidarity and love make us smile, and make us believe that we are not alone, that we are together and that we will win.

PS [from Dmitry Semenov, freerussiahouse]. At the end of his letter Ilya Shakursky sent a message to the interviewer, not for publication. At the end of that message he again expressed thanks for the interest shown in the case, and best wishes. From my side I would like to send Ilya and his friends rays of support, for their freedom. “For sure, this will all pass.”

Also in Russia, on 18th January, antifascist Azat Miftakhov was sentenced to six years imprisonment for refusing to plead guilty to breaking a window.