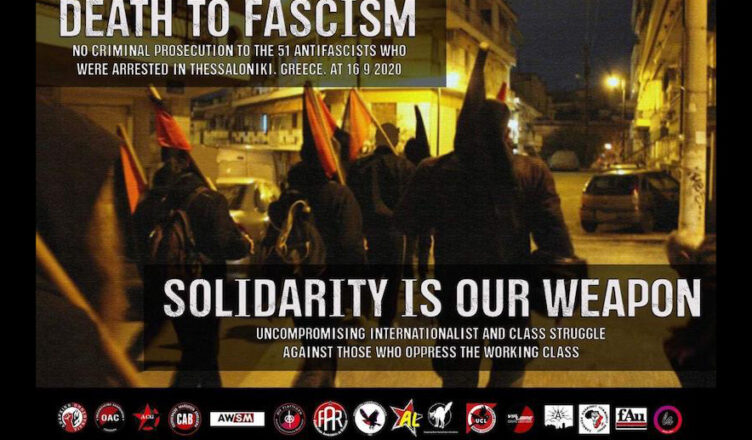 The following statement was signed by the ACG and 16 other libertarian organisations.

International statement of solidarity with the 51 anti-fascists who were arrested in Thessaloniki, Greece, on 16/9/2020

In the evening of 16/9/2020 at Thessaloniki, Greece, during a social intervention, antifascists were collectively erasing fascist hate slogans and graffiti, which were written a few days earlier by members of the new neo-Nazi party “Greeks for Fatherland” (Έλληνες για την Πατρίδα) – founded by Ilias Kassidiaris, an ex-representative of the Nazi party “Golden Dawn” (Χρυσή Αυγή) – and replacing them by antifascist graffiti instead. Around 10:30 PM our comrades were surrounded by a large group of police forces that attacked them without reason. Fifty-one comrades were taken into custody to the Police General Headquarters in Thessaloniki and kept there 2 to 4 days under the most deplorable conditions. In total, fifteen of them were injured while another two were even admitted to the hospital due to the heavy injuries caused by the police officers involved in the attack. Both during the arrest and under custody, the police did not cease to provoke and abuse their power – the ability to rule and control given to them by the state -, attempting to break the spirit of our comrades.

The 51 antifascists arrested were presented before the prosecutor and the investigator who made the following outrageous and untrue accusations against them: i) disobedience, because they refused to have their fingerprints and photos taken; ii) breach of the public peace (a very common charge that is pressed against the accused whenever there is a protest); iii) destruction of the public site, for antifascists painted graffiti and slogans with antifascist content to cover the fascist ones. This proves us that, apparently, for the greek bourgeois “justice” courts the only permitted form of speech to be written on the walls of the city is fascist hate speech; iv) violation of the law on the protection of antiquities; v) illegal possession of weapons, for the activists who attended wielded anarchist flags and helmets; and vi) criminal prosecution for “monument damage”. That last claim was made by the curator of antiquities, which had no problem supporting this obscene lie, even though the “monument” which was damaged is nothing less but some benches located near the actual historical monument of Thessaloniki, the White Tower. What is also interesting about such a claim is that the construction of those benches in 2008, which were part of Vasilis Papageorgopoulos’s plan for business regeneration, was the one who destroyed the area around the historical monument of the city. Papageorgopoulos is no one less but the former city mayor and member of the now ruling right-wing party New Democracy, who was set free from prison after embezzling 30.000.000 euros from the municipal funds. Not unexpectedly, the antifascist slogans were easily cleaned the following days by the city street cleaners, of course leaving intact the fascist ones.

This provocative attack against the members of the anti-fascist movement demonstrates the true colors of capitalist oppression and the State’s tolerance towards the fascists, whom they constantly nourish as their most reactionary reserve. What happened on September 16 against our comrades is for us an evident provocation by the state and the police, coinciding with the annual antifascist demonstration on the anniversary of the assassination of Pavlos Fyssas (anti-fascist hip hop musician who was murdered by members of Golden Dawn only a few days away from this year’s incidents) and with the completion of the trial against the criminal neo-Nazi organization Golden Dawn (in which the prosecutor gave favorable treatment to the Nazis). And yet, on September 18 massive demonstrations took place all over the country and gave out a strong message of resistance and struggle against the State, the capitalists, and the fascists’ involvement within the State. In the city of Thessaloniki alone, around 3000 protestors filled the streets for the antifascist demonstration.

We will not let our comrades or any member of the anti-capitalist and anti-fascist movement fall into the hands of state oppression. Our solidarity towards the antifascists arrested on September 16 will endlessly be provided. It is our collective obligation to create a safety net to defend them before the vindictive prosecution of the State. Offering political support and solidarity to our comrades is part of our duty as members of the international anti-fascist movement. As anarchists and anti-fascists we will stand by them in all ways possible, continuing our unwavering collective fight for social emancipation and contributing to the achievement of proletarian justice.

NO TO THE CRIMINAL PROSECUTION OF THE 51 ANTI-FASCISTS WHO WERE ARRESTED IN THESSALONIKI, GREECE, ON 16/9/2020
UNCOMPROMISING INTERNATIONALIST AND CLASS STRUGGLE AGAINST THOSE WHO OPPRESS THE WORKING CLASS DEATH TO FASCISM
SOLIDARITY IS OUR WEAPON