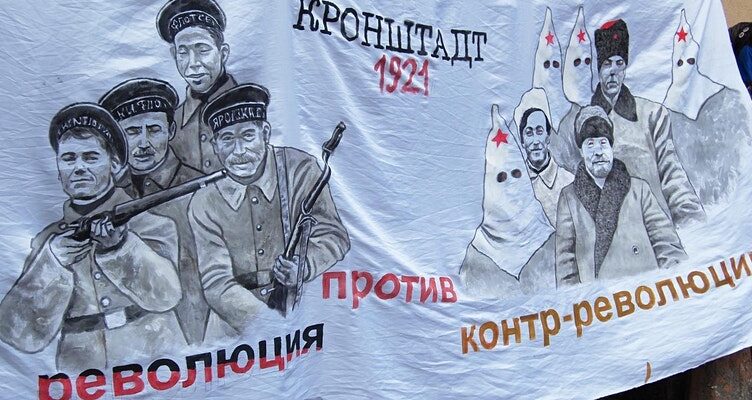 ACG Public Meeting: The Kronstadt Revolt 1921: The Crushing of the Flower of the Revolution

A meeting to mark the centenary of the Kronstadt rebellion, crushed by the Bolsheviks. What are the lessons to be learned for today?

In this meeting we look at the circumstances that led up to the Revolt, and examine the idea of an aborted Third Revolution intended to carry out the true revolutionary aims of the Russian masses. We look at the implications of what happened and how the truth about Kronstadt needs to be revealed to expose the dangers of Leninist vanguardism, which still has a detrimental effect on our struggles today.

The sailors at the naval base of Kronstadt were at the forefront of the Russian Revolution of 1917. They formed one of the first soviets in summer of that year. They were among those who stormed the Winter Palace in October. They took an active part in the defence of Petrograd against the White advance. Yet by 1921 they were disillusioned with the Bolshevik government, with War Communism, the lack of free speech, the exactions of the Cheka, the Bolshevik political police, and the brutal grain requisitioning in the countryside. On March 1st, 1921 they held mass meetings of up to 15,000 on various ships and garrisons and demanded immediate new elections to the Soviet by secret ballot; freedom of speech and the press for all left and anarchist parties and groups; freedom of assembly for trade unions and peasant organizations; abolition of Communist political agencies in the Army and Navy; immediate withdrawal of all grain requisitioning squads, and re-establishment of a free market for the peasants.”

For this they were denounced as agents of the Whites. In reply, they broadcast the following radio message: “Comrade workers, red soldiers and sailors. We stand for the power of the Soviets and not that of the parties. We are for free representation of all who toil. Comrades, you are being misled. At Kronstadt all power is in the hands of the revolutionary sailors, of red soldiers and of workers. It is not in the hands of White Guards, allegedly headed by a General Kozlovsky, as Moscow Radio tells you.”

Trotsky ordered the Red Army to attack. Fierce fighting followed and the revolt was brutally crushed. Victor Serge wrote: “The final assault was unleashed by Tukhachevsky on 17 March… Some of the rebels managed to reach Finland. Others put up a furious resistance, fort to fort and street to street; they stood and were shot crying, “Long live the world revolution! Hundreds of prisoners were taken away to Petrograd and handed to the Cheka; months later they were still being shot in small batches, a senseless and criminal agony. Those defeated sailors belonged body and soul to the Revolution; they had voiced the suffering and the will of the Russian people”.

Get your free Eventbrite ticket here