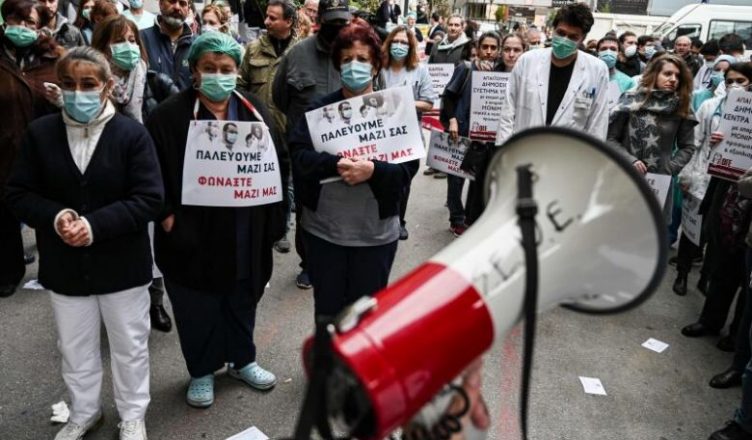 The health service in Greece is in a dire situation after years of cuts by successive governments, the social democratic Pasok, the right wing New Democracy and the radical leftist Syriza.

Workers at Evangelismos hospital in Athens held up signs, demanding that more staff be taken on, that virus testing should start, and that PPE equipment should be provided. The police tried to enter the courtyard to end the demonstration but were forced back by the demonstrators. Another demonstration took place at the main hospital in Larissa in central Greece.

Demands also went out among the demonstrators for the requisitioning of intensive care units in private hospitals. The New Democracy government is now panicking and is offering 30 million euros to hire 2,000 doctors and 2,000 nurses on short term contracts when at least 30,000 permanent staff are needed. Other demands were for direct and free access to health care for all, the ending of subsidies to private health, no redundancies, and the right of health workers to take sick leave if necessary. At the same time New Democracy is increasing its funding of private hospitals, hiring beds from them at a daily rate of 1600 euros. It is also funding virus tests by private health to the sum of 30 million euros.

The 2010 to 2018 financial crisis in Greece had severe effects on the health service there with the International Monetary Fund and the European Union demanding austerity measures. Deaths sustained as the results of these cuts are the responsibility of the EU and IMF, and they and Pasok, New Democracy and Syriza, are the guilty parties!

Syriza, once the Great White Hope of leftists in Greece and internationally, has swung in behind the New Democracy government in the name of “national unity” just as the Starmer-led Labour Party is doing here. Meanwhile the government is preparing repressive measures for an anticipated wave of unrest when the pandemic crisis abates.