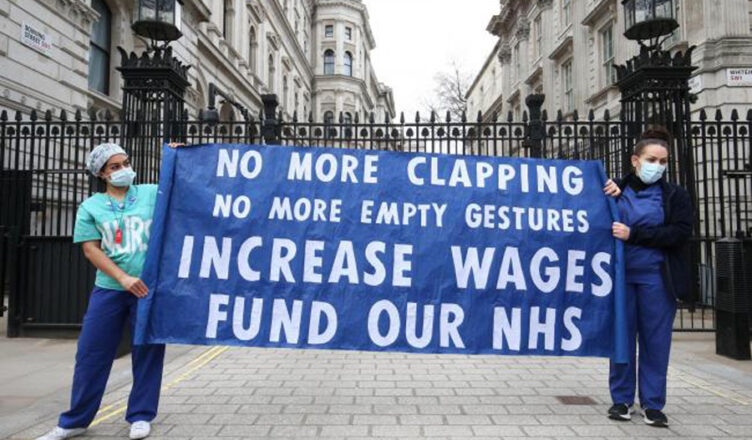 By offering burned-out and emotionally exhausted health workers a pay rise of 1%, Johnson’s government of fools and crooks seems determined to finish off the NHS once and for all.

Health workers have lost 10% of their pay in real terms over the last decade.

The current workforce is carrying 115,000 vacancies, predicted to double over the next five years and, as a result, more than half the NHS workforce is working unpaid extra hours.

To make staff shortages worse, Priti Patel intends to charge health workers from the EU the full cost of their visas. At the same time, the next apparent head of NHS England, Dido Harding, is indulging in dog-whistle racism by generating headlines like “No more NHS reliance on foreigners”. Does she know the NHS has more than 170,000 overseas workers? Does she even care, given her appalling record? The same Dido Harding has given the private sector £37 billion of public money for a test and trace system that doesn’t work.

While claiming it can’t afford more than a 1% rise for NHS staff, the Government is siphoning off £10 billion of the NHS budget to shore up private hospitals. In the meantime, chronically over-worked NHS staff are facing the biggest ever waiting list in the history of the service, over 5 million cases, in addition to meeting the demands of the pandemic.

The pseudo-independent Pay Review Board which makes recommendations to the Government on health service pay is currently meeting. The health trade unions have submitted their claims; Unite, 15% or £3000 minimum, RCN 12.5%, Unison £2,000 minimum, and GMB 12.5%. The Government will pretend to listen to the Pay Review Board and make its formal decision in July, before Parliament breaks for the summer.

The unions will then ballot their NHS England members on the Government’s offer. The omens aren’t good. Unison health members in Scotland have already accepted the 4% offer from the Scottish Government, a stab in the back for their co-workers in England.

Campaigning bodies like Health Campaigns Together and Keep Our NHS Public are trying to mobilise public support for a 15% settlement. The actions kick off nationally on July 3rd, with rallies and marches in major towns and cities across England. Latest information here:
Keep Our NHS Public website

To health workers we say “meet up with your co-workers to discuss the pay claim. If the unions don’t call a workplace meeting, organise your own to decide what to do. Talk to patients and the public for their support. Make online links with workers in other NHS trusts. This not about “fairness” or a reward for heroes, this is about your rights as a human being.”