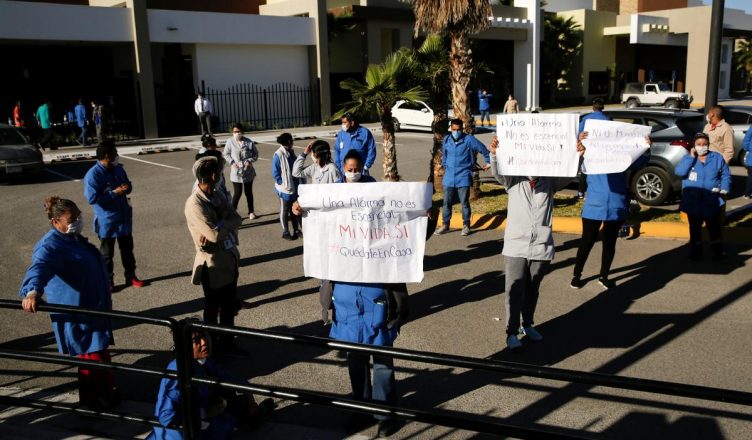 The coronavirus plague has aggravated the situation of many people in Marseille. There, unemployment is particularly high, running at 25% compared to the national average of 8.5%. 39% of the Marseille population live below the poverty line.

Now, the pandemic has pushed many of them over the edge, with many fired or laid off because of the effects of the pandemic. Food is running out among many families and single people. In part, mutual aid groups have responded to the appalling situation with food distributions.

McDonalds workers in neighbourhood of Saint-Barthélemy, supported by some of the mutual aid groups, took over the restaurant and began to use it as a food storage and distribution centre. This is all carried out with the strictest sanitary conditions being adhered to. They were supported by local residents and shopkeepers.

The management of McDonalds have responded by condemning the action of the workers. In fact, they are anxious to claw back profits by announcing that they were re-opening their drive-through ordering and deliveries, endangering workers’ lives. They care nothing for the well-being of their workers or that of the general population. For them, profit comes before health.

Workers at the Amazon centre in Torrazza Piemonte, near Turin, went on unofficial strike after 4 cases of coronavirus had been confirmed at the centre, which employs 1200 workers. It is the second strike there against lack of safety at the centre.

Dozens of workers demonstrated at the Honeywell assembly plant in Ciudad Juarez. They called for its closure after a worker there died of COVID-19. The plant makes smoke alarms, which the workers consider an unessential service. Elsewhere along the border with the USA, protests erupted at factories at Mexicali, Matamoros, Reynosa and Tijuana after the Mexican government on March 30 ordered non-essential industries to suspend operations. They demanded that their workplaces be closed during the crisis, and that they be kept on full pay.

In Tijuana workers at the Poly technology company demonstrated after the death there of two fellow workers from coronavirus.

Workers at the Penta meat refrigeration factory in Quilmes demonstrated at the factory gate after 240 workers were fired and wages and benefits remained unpaid. The police arrived and began to attack the workers with truncheons and rubber bullets, hospitalising at least twenty of them, one of them in a critical condition. The cops – certainly an unessential service – are at the beck and call of Ricardo Bruzzese, the boss of Penta.

In Sao Luis, the capital of the State of Maranhao, health workers at the Djalma Marques municipal hospital threatened an unofficial strike after the death of two fellow workers.

Health workers, including nurses, technicians and admin staff at the Minas Gerais State Hospital in the south eastern State of the same name, went out on wildcat strike on April 15th. The strike was sparked by a lack of PPE equipment and by the denial of a temporary bonus awarded to doctors only. That evening, far to the north, at Belem do Para, nurses marched out of the emergency room at the hospital and blocked the road, protesting against the unsafe conditions of themselves and their patients. The following day, health workers at the Sacramenta Emergency Care Unit in Belem, walked out and demonstrated.

The President of Brazil, Jair Bolsonaro, a friend and ally of Trump, is, like him, calling for a return to work, and is putting pressure on State governors to end lockdowns, further aggravating the situation in Brazil.

Workers have reacted with anger to the cancellation of their contracts as a result of the pandemic. Hundreds massed at the transit station in the capital, Bogota. Many have little or no food. In the Bosa neighbourhood, 50 workers blocked the streets and demonstrated against the ending of their contracts. In Alto de la Virgen, in Medellin province, local residents protested about lack of food due to the crisis, with many facing starvation.

Ninety one student interns at the Industrial University of Santander went out on strike on April 9th over lack of PPE equipment.

Food processing workers in Illinois at Raymundo’s Food Group at Bedford Park went on strike on April 3rd after a fellow worker caught COVID-19. They said that the bosses had not imposed safe social distancing. Since then, they have gone into self-quarantine. They are demanding a $20 an hour hazard payment and a deep clean of the factory. The bosses, in a despicable move, replied that they would not provide a hazard payment and would replace workers.

At Amazon, some workers are calling for an online strike on April 24th.This is to protest the firing of warehouse workers who have blown the whistle on the lack of safety at warehouses. Two members of the group, Amazon Employees for Climate Justice, have already been sacked by the company. Meanwhile, workers at Whole Foods, also owned by the Amazon boss, Jeff “Nosferatu” Bezos, are organising a nationwide “sick-out”, phoning in sick, on May 1st. This is over concerns about safety conditions, and management obstruction in gaining sick leave.

This week, on April 13th, workers at One World Beef factory in Brawley, California, refused to come to work after at least one worker tested positive for the corona virus. Hundreds of workers at Tyson Fresh Meats factory in Waterloo, Iowa, organised a sick-out, phoning in sick, to protest over safety conditions and their knowledge that management are letting sick workers carry on working .Forty workers at General Dynamics naval shipyard in Norfolk, Virginia, went out on strike on April 14th and 15th over safety concerns, after a fellow worker died from COVID-19.

In Toronto, at an adult disability care home, practically all the workers went out on strike over lack of PPE equipment after 10 residents and 2 workers tested positive for coronavirus. Management grudgingly responded by offering to double the minimum wage of the workers.