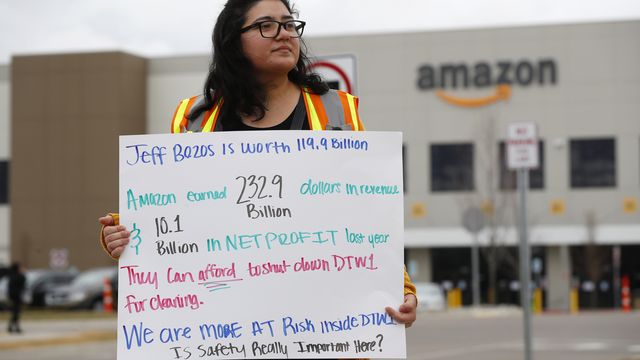 Ten branches of the supermarket chain Carrefour were closed down by workers on Friday April 3rd. They demanded more protection and better pay during the crisis. They were in Charleroi (Gosselies), Antwerp (Berchem), Liège (Ans), Drogenbos, Wavre (Bierges), Kraainem and in the Brussels municipalities of Auderghem, Evere and Etterbeek.When the supermarkets are raking it in with the crisis, putting up pay is little to ask. More strikes may be in the offing. Earlier workers at the Delhaize retail went out on strike over lack of masks and gloves. In a settlement with management they gained 500 euro bonus each in in-store vouchers .

Steelworkers at the Sidenor plant in the Basque country protesting over being forced to work in unsafe conditions were attacked by police on March 30th who dispersed their protest. This is a police controlled by the joint Socialist and Podemos government. Podemos are rapidly going the way of Syriza in Greece, turning on the working class after pledging to fight austerity measures.

Workers at Amazon’s Chicago delivery depot demonstrated outside on Friday April 3rd after 2 workers tested positive for COVID-19. No masks or gloves are being provided by Amazon. They are demanding that the depot be shut down for two weeks and workers be kept on full pay, that Amazon pay for medical treatment for workers and members of their families, the end of the rate system that Amazon bosses use to speedup work, and the immediate reporting of any new cases of coronavirus to the workforce.

600 metal workers at Gebze near Istanbul walked out on April 1st after management insisted on work going on after the reporting of a worker who had tested positive. Earlier building workers in Istanbul went out on wildcat strike at various sites. In the southern border town of Hatay, workers walked out at a filter factory. In response the governor of Kocaeli province banned strikes and demonstrations for 15 days.

More than 550,000 tea plantation workers went out on strike on March 27th, 30th and 31st in the Moulvibazar and Sylhet districts after the government proclaimed a 10 day holiday because of the spread of coronavirus for government and private sector workers in non-essential services and the tea bosses insisted that they carry on working. Tea workers work and live in crowded and unsanitary conditions.

Health workers, including doctors and nurses, went out on strike on April 2nd at Angau Memorial General Hospital over lack of provision of protective equipment. They demanded the sacking of the Chief Executive Officer of the provincial health authority and boarded up his office (health workers here, take note!).

Sixty Melbourne dockers refused to unload a ship from China after it had stopped off at Taiwan and had docked at the port of Melbourne before the end of the government’s 14 day quarantine period. They were stood down by the port authority.

Nurses in two hospitals in Kakamega and in Klifi went out on strike because of lack of PPE equipment. In Nairobi nurses protested over the same situation.

Nurses protesting at the Bongani Regional Hospital in Welko over safer transport after being forced to use taxis were attacked by the police who used stun grenades and rubber bullets . Two nurses were hospitalised as a result.

In a separate event military police and soldiers attacked taxi drivers in Port Elizabeth after they went out on wildcat strike. They had set up blockades and stopped informal taxi drivers from operating. They were demanding government compensation for loss of earnings because of the coronavirus. Many taxi drivers were arrested and ten taxis were impounded.

Meanwhile prisoners in South Africa went on hunger strike after the false claims by the prison authorities that they were carrying out sanitary measures.

Doctors and nurses at hospitals in Harare went on strike after reports of nurses dying from the virus. Conditions in Zimbabwean hospitals are appalling with many without running water. Health workers are demanding PPE gear and a proper water supply as well as a risk allowance. Elsewhere customs officers came out on strike over coronavirus concerns.