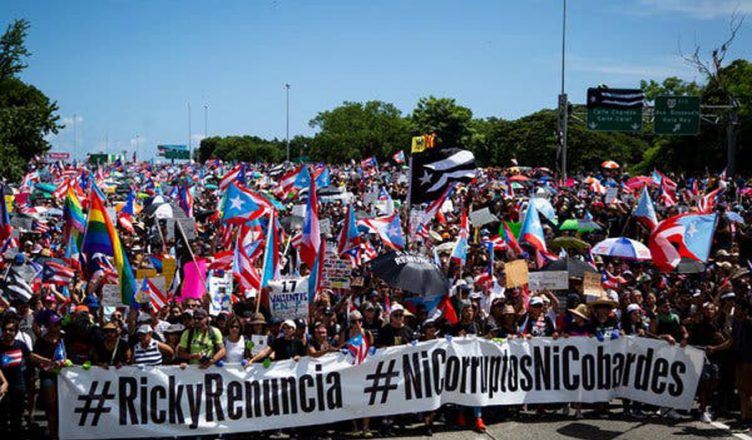 A half a million people demonstrated in San Juan, the capital of Puerto Rico, the Caribbean island owned by the USA. In the biggest demonstration in Puerto Rican history, on Sunday July 22nd, demands were put forward for the resignation of US Governor Ricardo ‘Ricky’ Rossello. This huge demonstration followed 12 consecutive days of demonstrations, during which riot cops launched attacks.

Calls were put forward for a general strike, which took place the following day, with massive support and the island paralysed as a result. In mainland USA there were solidarity actions in several cities where there is a large Puerto Rican population. On Thursday July 25th, Rossello handed in his resignation.

The unrest was sparked off by the release of 889 pages of private messages between Rossello and leading officials in his administration. It was revealed that after the devastation caused by Hurricane Maria in 2017, the chief financial executive, Sobrino Vega, remarked “Don’t we have some cadavers to feed our crows?” In other messages Rossello made vile sexist comments about female opponents, homophobic comments about gay singer Ricky Martin, and derogatory remarks about ordinary Puerto Ricans.

These revelations were merely a catalyst for the simmering discontent in Puerto Rico. There have been decades of neglect of the American colony, with many factory closures, the neglect that followed Hurricane Maria, and the austerity measures started by Obama and continued under Trump.

The same week that the messages were leaked, two former officials of the Rossello administration were arrested on corruption charges, $15 million stolen from national budgets. One of these, Julia Keleher, the Education Secretary, is an ally of Trump. After Hurricane Maria, she shut down 283 schools and laid off 5,000 teaching staff, sparking strikes.

The demonstrations have been notable for both the presence of older people fighting to defend their pensions, and of the young fighting against cuts in education and continuing privatisation there.

When Rossello resigned, Justice Secretary Wanda Vasquez stepped forward to take his place. But demonstrators saw that she was close to Rossello and are refusing to demobilise, planning another demonstration for Saturday.

This huge mobilisation is terrifying the Trump administration. Trump, in his usual way, has disowned Rossello. What he and his fellow establishment colleagues, which includes the Democrats, are scared stiff of is that such huge mobilisations could spread to the mainland.