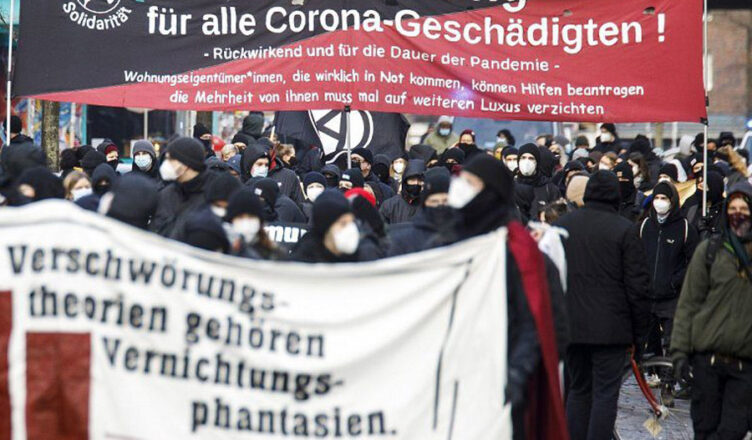 Despite zero temperatures and the lockdown, eight hundred people in a socially distanced and masked demonstration on Sunday, January 17th in Hamburg, called for zero Covid and with chants like “Make the Rich Pay”. This put over the message that the pandemic crisis should not be loaded on the backs of those who already are paying the bill for the pandemic, the working class. It was also directed against the conspiracy theorists, anti-Semitic coronavirus deniers, backed by the far right, who had announced a silent march in the city. But it was more than that, as one of the organising groups for the demo wrote:

“’Normality’ was an imposition even before Corona. Instead, we go on the offensive for a society of solidarity. Wouldn’t it be great if we could all decide together on how we work and how we want to produce? When the few no longer have almost everything and everyone else almost nothing? Money and resources are there enough, we just have to take it. The slogan of the hour that sounded through Hamburg’s streets today: strike, occupy, expropriate!”

They protested against fascism, capitalism, repression, and to demand immediate and free access to the vaccine for all residents of Germany, be they citizens, refugees, or undocumented migrants. They demanded that the free market not handle distribution and for rich people not to be the first to receive the vaccine.