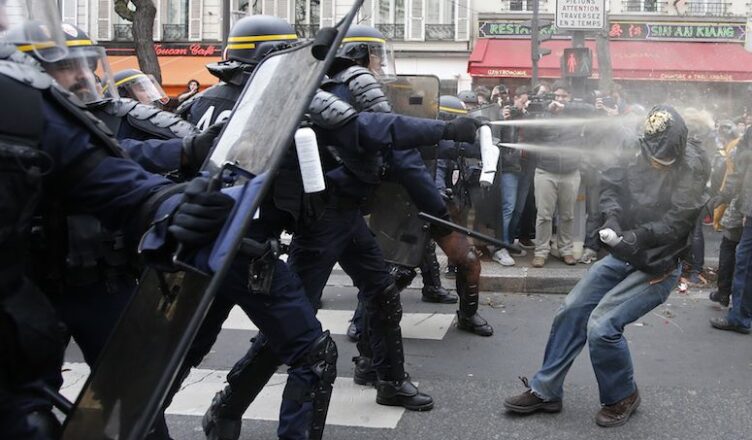 On Saturday November 21st thousands demonstrated in Paris and other cities over plans to bring in a new security law on “global security”. This proposed law would:

a) widen access to video surveillance by cops, to recordings from individual cameras as well as the possibility of real-time transmission of these images to the cops. This means access by national and municipal police to security cameras in shops, public buildings and in apartment blocks.

b) allow the use of drones with an on-board camera as a surveillance tool, with facial recognition, especially during demonstrations. Their use will facilitate the identification of individuals and the massive collection of personal data.

c) make it a criminal offence to publish images of police officers with intent to cause them harm. Offenders would face a maximum penalty of up to one year in prison and a 45,000-euros. This would affect anyone, including journalists, who take pictures of the police engaged in violence on the street or at demonstrations.

The new law is there to protect the police who continue with their campaign of brutality against the population in general. As a leader of a journalists’ union remarked, it has only one goal, “to boost the sense of impunity of law enforcement officers and make invisible police brutality.”

In July, 3 cops were charged with manslaughter of a delivery worker, of Algerian origin, caught on camera, in circumstances remarkably similar to the death of George Floyd in the USA, and which set off a series of Black Lives Matter demonstrations throughout France. This law is meant to ban the recording of such incidents and to give carte blanche to murder, mayhem and thuggery, often racially motivated, committed by the mercenaries of the State, the cops. Forty two people have been murdered by the police since 2019.

The Macron regime depends on the police to impose its will, and have put forward the new law to head off unrest and dissatisfaction within a police force radicalising towards the right, a police force generally detested by the mass of the population.