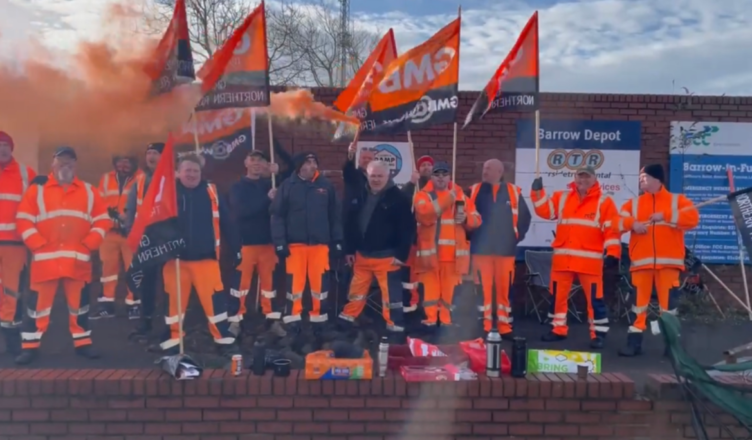 Workers voted to strike at Fawley Refinery near Southampton on 8th April. The refinery is owned by Exxon. The forthcoming strike has been preceded by three large demonstrations. Contracted workers are demanding wage parity and sick pay with workers at Fawley directly employed by Exxon. They work for Trant Engineering Limited, Veolia Services and Altrad Services. Exxon made a profit of £6.25 billion in 2021. The refinery is the biggest in the UK, and supplies a sixth of all petrol stations and all airports.

Cardiff bin workers voted by 98% to strike in late March. The strike action will begin in April. Bin workers are sick of management bullying and against the use of outsourcing agencies.

Bin workers for Adur and Worthing council have now been on strike for four weeks. They are striking over pay and conditions. However, the strike has been complicated by bickering between the GMB union and the council recognised Unison.

Around 100 workers at recycling centres and refuse collection services working for North Somerset Environment Company are set to strike next Tuesday for 48 hours. The workers have rejected a pay offer by North Somerset Council of 4.5% over two years. A further four days of strike action are planned.

Bin workers working for FCC Environment which has a contract with Barrow council have rejected a rotten pay offer of 2.2 %, well below inflation. Eleven days of strikes have already happened. However, the GMB which initially asked for a 3% rise now says it will accept 2.8%, still well below inflation. Workers have used direct action, padlocking the depot to stop trucks coming and going.

Workers at Chep UK in Trafford Park, Manchester, have now been on strike for 19 weeks. Management ‘s final offer, which would mean a lousy deal next year, was rejected. The workers are now preparing to vote for a further 12 weeks of strike action.

Workers at the GE Aviation factory are striking every Friday. They rejected a two year pay offer of 4.5%.