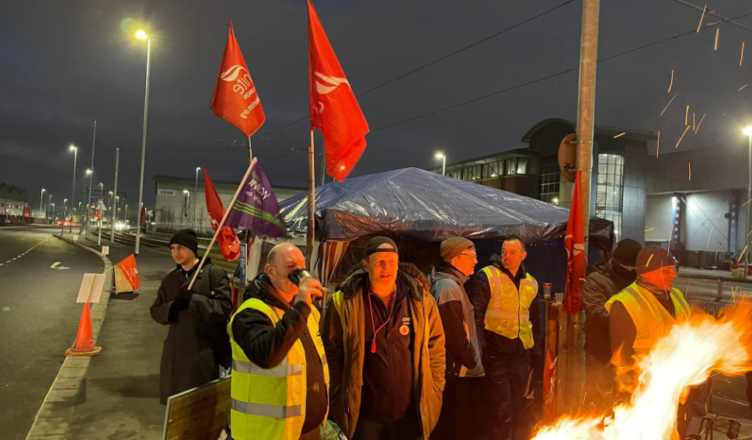 Workers at the major makers of pallets, Chep UK, based in Trafford Park, Manchester, went out on indefinite strike from December 17th 2021. They had already taken strike action since action began earlier in the month. Chep bosses have refused anything beyond a measly 2% pay rise. This in effect means a pay cut with inflation soaring to 7% and rising. Chep is making very large profits at the moment and this refusal to grant a reasonable pay rise has angered workers as has its refusal to negotiate. Last year’s declared profits were a whopping £150 million.

There has been considerable solidarity from the local community, and between 70 and 80% of delivery trucks refusing to cross the picket lines.

Chep supplies pallets to many companies across North West England, including Heinz, Heineken, inBev, A&B Containers, Encric and TDS. As a result of the strike there has been a severe shortage of pallets.

After 12 weeks of strikes, Chep workers are now re-balloting for another twelve weeks. They remain committed to action. The Chep bosses have brought in scab workers but they cannot deal with the backlog. There were 15,000 pallets needing repair at the beginning of the strike, now there are at least 120,000. There has been support from Rolls Royce Barnoldswick, Oldham bus depot, cleaners at Piccadilly station and Longsight depot.

Chep workers need to spread the action by picketing Chep customers like Heinz and Heineken. In doing this they will have to ignore the union bureaucrats. In addition, they need to build on community support and pressurise Manchester Trades Council to mount a massive demonstration and rally in support. So farx, the Trades Council has put on an online rally but this should now be one in the real world.