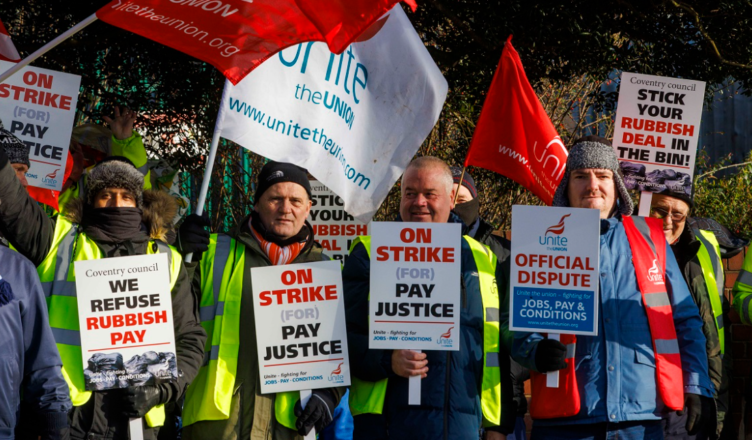 Reflections on the Solidarity Rally in Coventry 26/03/2022

A number of ACG Members from the Central Group attended the rally in support of the striking Coventry City Council’s HGV drivers who drive bin lorries. We attended as members of various Unite Community Branches in the Midlands. The word from Unite regional organisers is that Unite is determined to win the bin workers dispute and Unite Industrial and Community Branches were strongly encouraged to attend the rally. The drivers were not receiving the going rate for the job and voted overwhelmingly for strike action. The leader of Coventry City Labour Council refuses to talk to Unite and is leaving negotiations with Unite to council officers. A Unite rep has been suspended and the council has spent more on hiring scab, agency workers than it would cost to settle the dispute. Coventry City Council is controlled by the Labour Party and a number of its Labour Councillors are Unite members. Unite the Union has suspended them.

It has to be said that Coventry City Labour Council has been placed in an invidious position by the Conservative Government. It is expected to manage the 14% cut to the money it receives from central government. But, as Sharon Graham pointed out on Saturday, the Council has found the money to award a 5 figure pay rise to its executive officers. In short, it is workers who are being made to pay for the incompetence and venality of the ruling class.

I was asked to distribute flyers promoting a People’s Assembly Cost of Living Crisis protest in Coventry on Saturday April 2nd by my Unite branch secretary. My branch is co-hosting the event. That gave me an opportunity to have a good look around and have a chat with those who attended the solidarity rally. The vast majority of the attendees were union activists or members of the various Trot parties. General members of the public were conspicuous by their absence.

The rally itself was a splendid spectacle – big balloons, loads of union flags and banners as well as the obligatory, Socialist Worker Party placards. There were also two Ukrainian flags displayed behind the podium reserved for the speakers. It was all very impressive and, no doubt, raised the spirits of the striking, HGV drivers.

Unfortunately, one has serious reservations about the chances of Unite and the bin workers winning this dispute. It is a bit like the nurses pay dispute. There does not appear to be enough support from the general public for anything more than gestures. Coventry City Labour Council is peddling a false narrative about the greed of the well-paid lorry drivers and it has traction. As Utah Phillips pointed out, under capitalism the bosses control the allocation of everything, including blame. And under capitalism blame gets allocated downwards. Members of the working class blame each other for the shit that happens and not the bosses. When the rubbish starts piling up and when the rats start biting babies, it will be the bin workers’ fault rather than the greedy, mendacious and corrupt bosses.

The TUC unions have the resources to carry out serious community organising. The bosses’ false narrative could be countered and public opinion could be influenced. It is easier, though, to stage, one-off, carefully choreographed spectacles than meaningful, community organising. More grass roots involvement and direct action could be encouraged but union bureaucracies know that that would leave them marginalised, out of control and out of a job. ACG members who are active in the labour movement must continue to work patiently to change the way that unions are run so that they benefit their members as much as union bureaucrats.