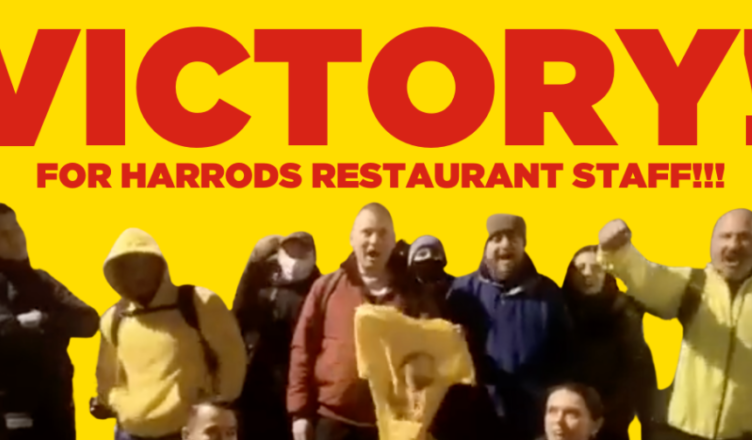 As restaurant workers at the posh Harrods shop in London (owned by the ludicrously rich Qatari royal family) threatened to go out on strike during the busy Xmas period, management were finally forced to cave in and accept the workers’ demands.

So, workers, members of United Voices of the World union, won just slightly under a massive 25% pay rise, thus increasing their pay from a meagre £9 an hour up to £11.50 an hour, with £12.50 an hour for chefs – both wages above the London Living Wage of £11.05. It means these Harrods workers will have around £5,000 a year extra, and this is with guaranteed annual 3% increases. Hundreds of waiting and kitchen staff will now benefit from the UVW workers’ resolve.

According to Mihaly, a UVW restaurant worker:

“After weeks of organising with our union UVW, we are delighted that our bosses engaged with us and recognised our hard work. We will be getting the pay rise we have fought for and that we deserve – good news for us and workers beyond.”

This isn’t the first time UVW workers have had success at Harrods. Back in 2017, they won a dispute over the company dipping into restaurant workers’ tips. Noisy demonstrations and the resulting bad publicity for this luxury shop with its filthy rich owners managed to kybosh that dodgy management practice, and ensured that staff got 100% of the tips.

It’s often said that “direct action gets the goods”, well in this case, just the threat of it got the workers what they demanded, without having to lose a day’s pay. So, we are more than happy to say a big well done to all concerned!