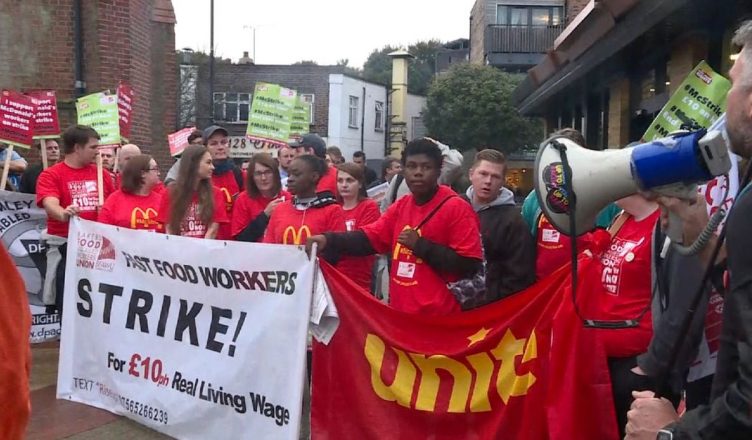 “Workers across the country came together to decide to ballot for industrial action. We want a better deal. We are the McStrikers, and we will not be silent, we will not be scared. We will do whatever it takes to win a better life for all McDonald’s workers.” Crayford striker.

Workers at six McDonald’s stores went on strike on May 1st. These included Cambridge, Crayford in South London, a central London branch, Manchester and two stores in Watford. A previous strike in September involved four stores, so the number of workers on strike has increased.

Workers demanded a minimum wage of £10 an hour, the same hourly rate regardless of age (young workers are being discriminated against) and the right to choose flexible shifts.

Workers from TGI Fridays, who have been balloted for strike action, joined the pickets in solidarity in Watford. In Cambridge the number of strike supporters, including university students, forced the management to close the drive through service.

The strike action is part of the #McStrike campaign, an international effort to organise fast food workers.

McDonald’s made a profit of $20 billion last year.