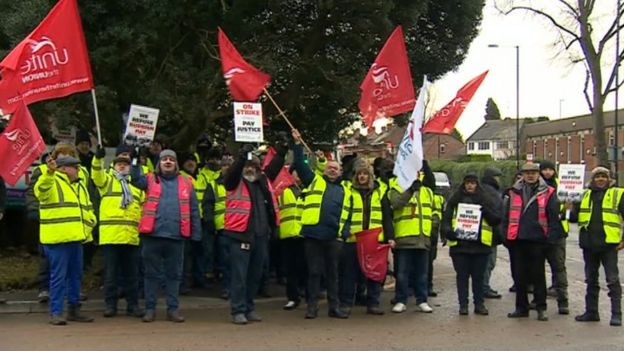 Seventy dustcart drivers in Coventry have been on strike over low pay and Christmas working for several weeks. An all out strike began a week ago, planning on running from February until at least the end of March.

In response, their employers, Coventry Labour council, issued slanderous statements about the striking workers. Then they hired agency workers to take over the bin cart drivers’ jobs. These scab workers are being paid at between £18 and £20 pound an hour, whereas the striking drivers are on £11.49 to £14.37 an hour.

Coventry Council has for the last ten years consistently slashed the services it manages. It has reduced refuse collections from weekly to fortnightly, which has cost dozens of jobs.

The scab workers are employed by Tom White Waste, which was bought by Coventry council for £14 million. The dustcart crews, not involved in the strike, are being told that they must work with these scab crews, or face disciplinary action. The striking drivers were told they might lose their jobs. Meanwhile Coventry Council makes out that Tom White Waste is just a contractor when in fact it is owned 100 per cent by the council.

Labour is no friend to the working class, as this latest appalling situation clearly highlights.