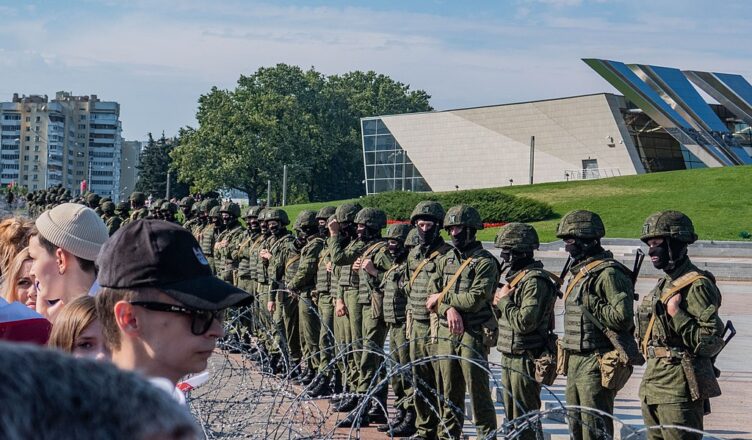 As Belarusian workers continue the struggle against neoliberalism in increasingly repressive circumstances we must remember the political prisoners.

A year has now passed since Belarus saw a surge of protests and strikes resulting from the corrupt ‘re-election’ of Aleksandr Lukashenko, whose neoliberal regime has clung on to power for 27 years. Tens of thousands protested in opposition to the state and its conduct of the ‘election’, and the state’s response was swift and brutal: 7,000 arrests with many instances of beating and torture. Three deaths resulted from police violence. A plasterer named Julia recalls how witnessing the police beating a fellow worker in the days after the election politicized her: “After witnessing the violence, I understood that nothing would be the same any more”. Within days she was elected as the chairperson of her strike committee.

This wave of strike action in support of the protests, which saw strike committees making preparations for a general strike, has drawn an equally chilling response from the state, with the arrest of more than 35,000 people in the past year. Trade Unionists, journalists, human rights lawyers and activists have been victims in this mass-repression. Amongst these victims have been many anarchists some of whom are still imprisoned (see link below).

During this period the regime has introduced aggressive new laws attacking freedom of association, press liberties and especially the right to strike. Although unions linked to the state-aligned Federation of Trade Unions of Belarus (FTUB) lost around 20 percent of their members in the Autumn of 2020 with many workers switching to independent unions, the conditionality surrounding the right to strike and the personal consequences of calling for, organizing or participating in one are rendering it extremely difficult to strike effectively. “Legally there is the right to strike, but in reality it is not feasible”, says Maxim Pazniakou, chairman of the Belarusian Independent Trade Union (BITU).

Although the protests and strikes resulting in opposition to the August 2020 election has been the immediate pretext for this latest upsurge of state repression, it is entirely in keeping with the Lukashenko regime’s long record of hammering workers with neoliberal labour laws intended to increase precarity and render workplace organizing impotent. Belarus has long had one of the most oppressive labour codes in Europe, and it’s getting worse.

The ACG extends its solidarity to the independently organized workers of Belarus in their continuing struggle against this neoliberal repression, and, in the light of an International Week of Solidarity with Anarchist Prisoners (23 – 30 August, 2021), wishes in particular to highlight the plight of anarchists arrested, beaten and incarcerated in Belarusian prison cells as a result of their involvement in the struggle. Details of many individuals can be found here: abc-belarus.org/?cat=3

Further details of the situation in Belarus, especially the draconian labour code and the resultant precarity and increasingly exploitative working conditions can be found here: www.equaltimes.org/one-year-after-the-protests#.YR97ZY5Kg2w