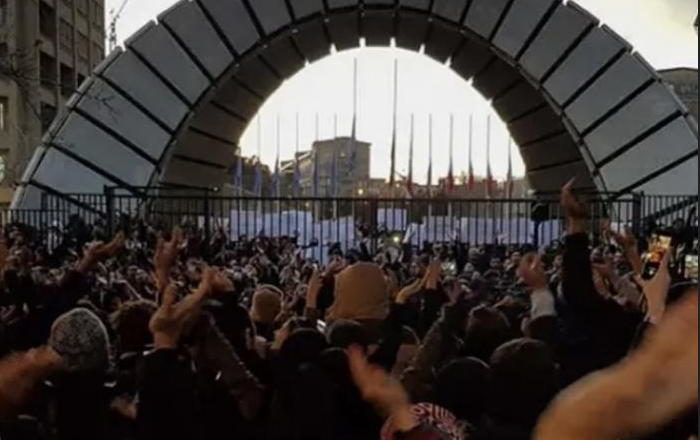 Life for teachers in Iran is tough. They are paid on average 58 million rials (just over £160) per month. Sometimes salaries are not paid for months, and bonuses and overtime pay are withdrawn. Many live below the poverty line, and are forced to find second and third jobs to support themselves and their families. As a result many work 14 hours a day and understandably their concerns are more focussed on earning a living than on the quality of their students’ education.

The Iranian Ministry of Education treats the concerns of teachers with indifference, and in no other sector are salaries so much in arrears. A salary increase promised in 2020 for the coming year never materialised. In addition, the cost of living in Iran has gone up by 30% in the last year.

As a result, thousands of teachers and education workers went out on a well-supported strike on September 18th 2021. Thousands of workers staged sit-ins. In December, another strike took place over two days. Strike rallies were staged in 25 provinces and 100 cities, including Tehran, Mashhad, Tabriz, Isfahan, Rasht, Sanandaj, Ahvaz, Arak, Karaj, and Kermanshah. Thousands assembled in front of the Iranian parliament building, the Majlis, and a similar rally in Shiraz was equally large. Many retired teachers, whose pensions are affected, joined the demonstrations.

The rallies were organised by the Coordinating Council of Educators/Teachers (CCETA) to protest against the non-implementation of an evaluation scheme and of an equalisation of pensions for teachers. The authorities responded by violently arresting an official of the Iranian Teachers Trade Association (ITTA), Rasoul Badaghi. He has already served seven years in prison for his activities.

These rallies took place despite intimidation and threats from the security forces and the judiciary. Slogans on the day included “Free all imprisoned teachers,” “Free all political prisoners,” “We have heard too many promises, but no justice,” “Livelihood, dignity are our inalienable right,” “Teachers are awake, loathe discrimination,” “Teachers cry out, demand your rights.” In addition, the teachers were protesting against the neo-liberal policies of the regime, and the cuts, privatisation and outsourcing in the education system. This is facing a crisis with a shortfall of 200,000 teachers required to teach the curriculum. The security forces turned out in force to ensure no slogans against the clerical regime were shouted, but apart from scuffles in Tehran and Shiraz, the events were peaceful at first but then security forces violently arrested a number of teachers. In Tehran teachers and education workers outside the Majlis chanted “shameless” at the security forces.

The teachers’ protests came just weeks after widespread protests against acute water shortages in Isfahan. These too were brutally repressed. Batons, tear gas, water cannon, air rifles and paintball guns were used to disperse the protesters. At least one student was blinded by a rubber bullet and many others sustained injuries.

The economic situation in Iran is deteriorating. Much of the intermediary sectors (the small shopkeepers and landlords etc.), between the working class and the ruling class, have vanished. The teachers’ strike is significant in that large numbers are defying the regime. With other struggles among oil workers, agricultural workers, miners and transport workers, this signals the chance of further widespread unrest bursting forth.

The Iranian regime is disturbed by the unrest in neighbouring Kazakhstan, fearing similar disturbance at home. Saeed Khatibzadeh, speaking for the Foreign Ministry, called for “dialogue based on national interests and peaceful ways without foreign interference.”

For our part, we look to the overthrow of the clerical regime by a mass uprising. Speed the day!