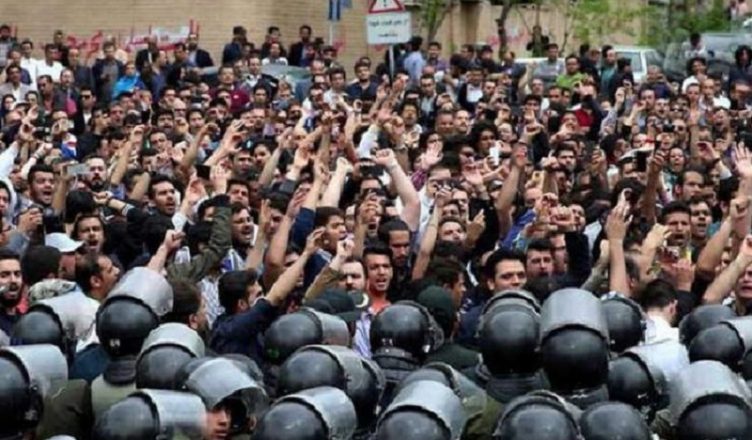 After the uprisings in Lebanon and Iraq, unrest has spread to Iran.

The unrest was sparked by rises in the price of petrol. Demonstrations took place in a hundred cities and towns and roadblocks were thrown up. This began on 19th November and increased in strength over the next week.

In response the regime suspended the internet in Iran after hundreds of videos showing large demonstrations, roadblocks and pictures of regime leader Ayatollah Khameini being set alight, as well as demonstrators being shot at close range. Khameini delivered a nationwide address supporting the price rise. He blamed the unrest on supporters of the son of the deposed Shah and on interference from the West.

Tens of thousands took part in the demonstrations, and the regime was forced to admit that people had “the right to give voice to their opposition”. It also admitted that twelve people had been killed during the unrest. Reports on social media before the shutdown claimed as many as 200 had been killed by the regime forces. The Fars News Agency declared that 87,400 people had taken part in demonstrations and that “more than 100 bank branches and 57 big stores had been torched or ransacked. Most of those who took part appear to be from the poorer sections of Iranian society.

The petrol price rise was a catalyst for the growing anger at years of austerity, mass unemployment, corruption and the widening gap between the rich and the poor. The regime was panicked into paying subsidies into people’s bank accounts, in what are promised to be monthly payments.

More recently the regime has been forced to admit that 200,000 people took part in demonstrations and that 731 bank branches were set on fire, and that 50 military and police stations and barracks were attacked. Some of the most intense unrest was in poor neighbourhoods in the capital, Teheran. The demonstrations were broken up by regime forces using live ammunition and tear gas, it was admitted but there was a reluctance to reveal how many had been killed or injured. An attempt to seize the headquarters of the State broadcasters, seen widely as a lying mouthpiece of the regime, were foiled.

The Interior Minister Rahmani-Fazli accused the demonstrators of being hooligans, with 10 to 20 per cent of them having criminal records. We have reported on previous unrest in Iran, but the latest revolts point to mass opposition to the regime, itself split between so called “moderates” and hardliners, and indeed the increasing fragility of that regime. As elsewhere in the Middle East, there is increasing anger among the masses against deteriorating social conditions. The region has long been a powder keg, and now social explosions are beginning to shake the ruling regimes there.

Meanwhile in Iraq, demonstrations have continued, with security forces killing 27 protestors in different parts of the country. The Iranian consulate in Najaf was attacked and burnt down, the second attack on an Iranian consulate in a month. After the first wave of unrest in Iraq which resulted in 149 people killed by security forces, the Iraqi Prime Minister promised reforms. However, demonstrators felt that their demands were not being met and returned to the streets in force in late October. So far at least 350 people have died in two months of unrest. As well as similar social conditions to Iran and Lebanon, there is anger at the intervention of the Iranian regime in Iraq.

Unrest continues in Lebanon, too. Members of the Shiite Hezbollah and Amal movements attacked demonstrators in Beirut. Large crowds have assembled chanting “For Revolution” and the increasingly secularised youth have taken an active part in the unrest, opposing themselves to all the different politico-religious factions, be they Shiite, Christian or Druze. The Prime Minister Hariri was forced to resign on October 29th, but the President Aoun has been so far unsuccessful in forming a new government.

This is a unfolding revolution that is decentralised, that increasingly rejects sectarianism and is determined in its moves to overthrow the old regime. What happens in Lebanon, and indeed in Iran and Iraq are immensely important for the push towards social change across the planet. We salute those in the Middle East who have continued their movements, despite police and military violence, killings and beatings, fake news, and attempts to divide and rule along sectarian lines.