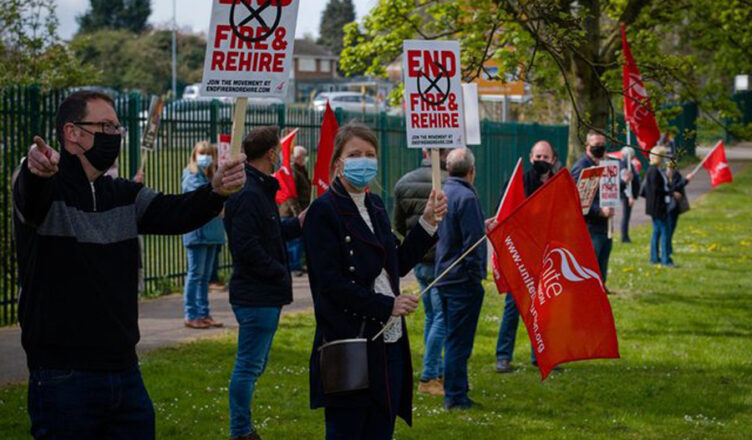 As we have stated here on the ACG website, fire and rehire is a tactic increasingly being used against workers in Britain. This means sacking workers and rehiring them on worse pay and conditions.

At the coffee plant in Banbury, Oxfordshire, the bosses of Jacobs Douwe Egberts sent out fire and rehire notices to 291 workers. This would affect pay, pensions and shift patterns, meaning some workers would be thousands of pounds worse off. Talks broke down, and a 24 hour strike took place on Saturday, 9th May. Workers at the plant were incensed by the bosses’ plans, and the strike was solid. This followed a demonstration the previous week. The May 9th strike was supported by workers families and supporters and many passing drivers showed their support by sounding their car horns.

The workers are determined to continue the struggle, in the face of the increasingly bullying nature of management, as for example a threat to sack workers who turned down overtime over the Easter holiday. A second solid strike took place on 15th May and from this week workers are escalating their strikes to one of 72 hours on Wednesday 26th May.