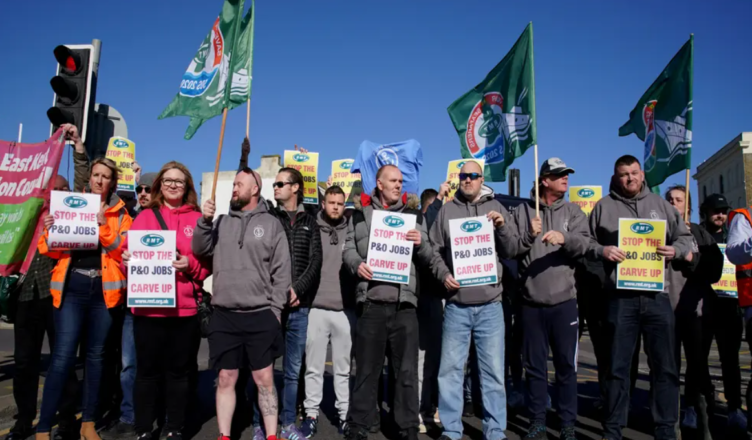 Kent ACG attended the RMT demo in Dover on Saturday. About the same number of people as the previous weekend (roughly 200). No Labour politicians this time that we were aware of, or any other politicians either. There were speeches again from various unions (Unite, CWU, GMB and, of course, the RMT) and a march along the main road along the seafront. The usual leftist, so called ‘revolutionary’ parties were there such the Socialist Party and the SWP. On the first Dover demo a member of the UVW was present to support the sacked workers and the RMT, as well as Kent ACG.

The rank and file RMT members wanted to take direct action regarding this situation from the start, but it seemed at least for a while that the bureaucracy had a different way of going about things and seemed to want to take a more legalistic approach. Things aren’t looking good and the ships need to be seized. The workers coming off the ships in the first place was a big problem and has made things difficult. It’s not looking good and it looks like if the P&O boss does go it will be with a big payoff, while the sacked workers remain in the same situation. Direct action is needed.

We in the ACG hear that on the RMT NEC they have a kind of rotation system where you can only be on the NEC for 3 years and then you go back to being a worker. So, NEC members know they have to go back to being a worker and looking other workers in the face again. This is because the RMT is an old union that came out of the syndicalist wave of the early 20th century in Britain. Kent ACG feels that the RMT need to take direct action in the spirit of these roots of the union.

Although it was just a march and speeches there were some good speakers and speeches, and there does seem to be some militant sentiment and the will to think about what can be done, and no doubt for action itself. But no real direct action here yet. A lot of motorists beeped in support and there was some support from people in the flats on the seafront and it was good to hear about the Rotterdam dockers refusing to load the Pride of Rotterdam. This is the sort of thing that is very much required. It does look like the RMT want to take the action of blockading ports which is a positive development. Meanwhile the much hated P&O boss, Peter Hebblethwaite, not reading the public mood at all, has stated that he will not reinstate the 800 sacked workers or step down from his job. Yet from this demo it does appear that the RMT and the friends of that union have the determined will to keep fighting on.