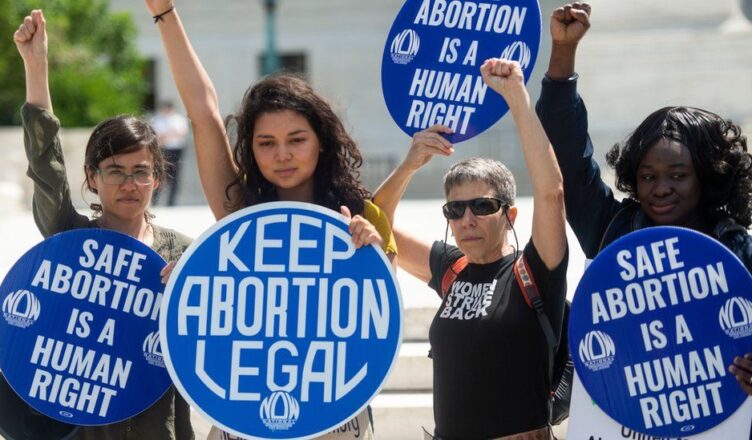 Tens of thousands marched throughout all the fifty states of the USA on Saturday October 2nd before the Supreme Court reconvened on October 4th. Trump packed the Supreme Court with conservative lawmakers before being voted out. As a result, they have refused to block the decision by the state of Texas to impose a law which effectively blocks abortion after six weeks of pregnancy, that is, before most women even have the faintest idea they are pregnant. In addition, the Texas law allows prosecutions by private citizens (the right, the fundamentalist Christian and Catholics) to sue anyone thought to be involved in aiding in abortions.

In addition, the state of Mississippi has banned abortions after fifteen weeks of pregnancy except for what are defined as “medical emergencies”. Medical workers involved in helping with abortions outside of these strictures are threatened with their medical licenses being suspended or revoked, as well as fines. Already two doctors have been put on trial for performing an abortion in Texas after the six-week period.

As a result of these moves by States controlled by Republicans, abortion rights in the USA are under serious threat. This threat affects working class women the most. This is because many cannot afford to go to another State where abortion is still legal. As a result, many may resort to back street abortionists, with the increased threat of infection, injury and death.

Ninety per cent of all US counties do not have abortion providers.

The Democrats cannot be relied upon to put up a credible fight against the erosion of abortion rights. They have been spineless in their opposition. Only mass mobilisations and direct action can thwart the plans of the anti-choice lobby.