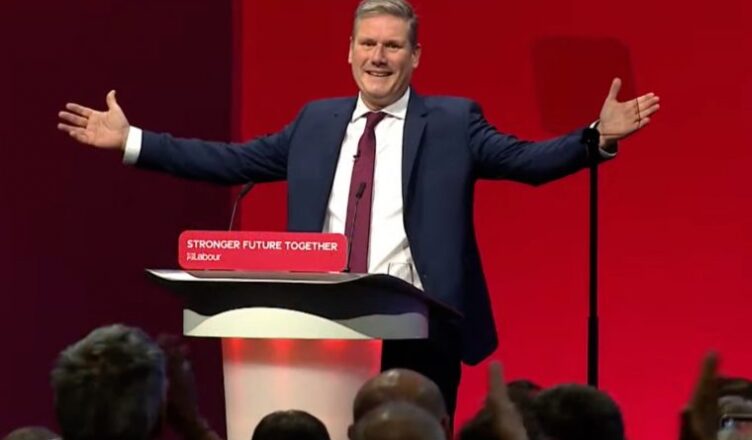 Keir Starmer’s speech to Labour Party conference promised nothing to the working class and plenty to the bosses. Starmer went out of his way to show how friendly he was to business, at the same time briefing his shadow cabinet not to support a call for a £15 an hour minimum wage. He promised more police, and tougher sentences, whilst lamenting the decline of Britain’s role in world politics. He underlined that “Labour is the party of NATO.”

Indicating his victory over the Labour left, Starmer praised the governments of Tony Blair and Gordon Brown. He refused to promise any further spending on the NHS and other public services, stressing instead the need to invest in business.

For the first time armed police were clearly visible at the conference, whereas at previous conferences they kept discreetly in background. This presence was clearly intimidatory. Meanwhile Labour officials ordered the delegates to stand and applaud Starmer, in something reminiscent of a Stalin rally.

It is now abundantly clear that the Labour left has been thoroughly routed. Corbyn stills remains outside the party, with the whip withdrawn and the Labour apparatus is now busy expelling members of the Labour left, including those delegated by their party branches to attend the conference.

In another sign of the defeat of the Labour left, the rules for the nominations of candidates standing in leadership elections was changed so that Labour MPS had a greater say in this. This means that the right now has a greater influence, as most Labour MPS stand on the right of the party.

Both in the main body of the conference and at rallies of the Labour right, there was jubilation over the defeat of the left. At a rally of the right wing Labour First, one speaker gloated that “We are the mainstream now”.

The role of Rayner

Angela Rayner was the first main speaker at the conference. An important figure in Corbyn’s shadow cabinet, she has easily made the transition to being a supporter of the new leadership. Rayner poses as the soft left conscience of the Labour Party, describing the Tory leadership as scum, and making references to the Shrewsbury building workers framed by the police back in 1972 and now exonerated (incidentally, not a single Labour government in the meantime lifted a finger to help them). Rayner acts as Starmer’s John Prescott, giving him a left cover. Meanwhile she herself eyes the Labour throne if Starmer fails to deliver.

Rayner makes much of her working class background, a bit more authentically than Starmer does, who claims his father was a toolmaker in a factory, when in actual fact he owned that factory. However, once she became an MP, it is clear that her main concern is not the working class but her own interests. She used House of Commons notepaper to complain to a shopkeeper that she had been unable to buy a pair of £195 shoes. She refused to say that Labour would scrap zero hours contracts in an interview on Radio 4, she abstained on voting on the Tory welfare bill in 2015, which led to cuts of £12 billion in social security spending, and cuts in child tax credits.

More recently, she refused to back the call for a 12% pay rise for NHS nurses, instead calling for the 2.1% increase outlined by the Tory government. The Labour pressure group Momentum, who backed her for deputy leader, is now bleating that they are disappointed by her lack of support for the nurses.

Since Starmer became leader, at least 120,000 have resigned their memberships of Labour. Yet despite the glaringly obvious fact that the right has seized back control of Labour, there are still those on the Labour left who encourage people to stay on.

We say that this is an illusion, the failure of Corbynism should once and for all indicate that social justice cannot come about through the election of another Labour government. Neither should those who have recently left or are leaving Labour look towards a Labour Party Mark 2, and repeat all the same mistakes. Instead, new movements need reinforcing and creating in the workplaces and the neighbourhoods, looking away from Parliament towards direct action and grassroots control.

In the event of the collapse of the Johnson regime, increasingly weakened by a perfect storm of crises- COVID, fuel supply, food shortages , lack of workers in agriculture and the food industries, corruption and cronyism- then the ruling class in this country still has a new Labour government up its sleeve. Such a government, whether under Starmer or Rayner- will be no friend to the
working class.