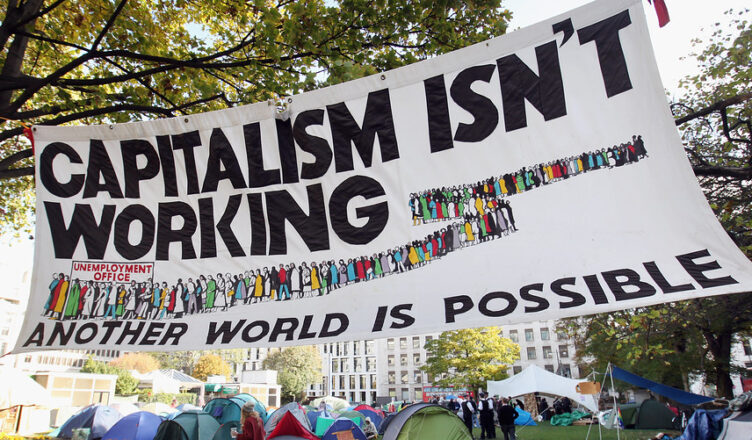 At the 2010 UK general election The Financial Times, the house paper of capital, argued for a vote for the Conservative Party and austerity. It stated:

“The state has grown too large, accounting for 48 per cent of national output. Its sprawling size threatens to stifle the economy, crimping private enterprise and the wealth creation vital to preserve Britain’s standing in the world. It must be hacked back.”

Eleven years on and the paper’s banner last week read:

“We believe in capitalism. But the model is under strain
We need to reform in order to preserve”

As President of the European Central Bank (ECB), Mario Draghi oversaw the EU austerity project that devastated countries, especially Greece, Spain, Portugal, Italy and Ireland. Now Prime Minister of Italy (governing by a technocratic stitch-up) he is borrowing as fast as he can. While in the US two more former austerity merchants Joe Biden and Janet Yellen (current Secretary of the Treasury and at the Federal Reserve during the global financial crisis) are spending at a rate of knots. Already a COVID recovery package and a $1 trillion infrastructure bill have been passed, with more spending measures on the way. And rather than opposing such spending capital, is not just going along with it but is actually in favour of these policies.

Here in the UK, the CBI shrugged their shoulders about a Tory proposal to raise corporation tax (in contrast to the outrage of the Labour Party). And now there is the increase on National Insurance (NI) contributions to (supposedly) pay for public services. So what is happening? Are these about-faces just for show, or are they signs of underlying shifts in the class war? For some, the impact of factors such as the global financial crisis, COVID, the climate crisis, etc have suggested that we may be seeing the decline, perhaps even end, of neoliberalism. But capital has always looked towards the state in times of crisis, hence the bank bailouts during the GFC.

The Guardian 2 Sept: Has Covid ended the neoliberal era?
James Meadway on Soundcloud: After neoliberalism
ECIPE: Globalization isn’t in decline, it’s changing
Mark Blyth video: a brief history of how we got here and why

Whether the changes we are seeing in the relationship between the state, capital and labour are a result of the end of neoliberalism or something less fundamental, it is worth looking at how things have shifted since 2010 and the aftermath of the global financial crisis (GFC). First, while many sectors of capital did see profits flow to them after the GFC, there has been a development of consensus in capital that the depth and speed of cuts in spending was harmful (or at least less beneficial). After all modern capital requires the state to provide for it, there is a need for decent infrastructure, workers with the correct skills, etc. Second, the attacks of states and capital on labour provoked a response, with populist parties and groups benefitting. While most (or even all) of these populist parties are anti-worker, that does not mean that they are necessarily favoured by capital. Overall, liberal democracy is seen as the better option than populism (of whatever variety) and so capital is willing to make some concessions to protect it (at least at the present time).

In light of these factors the differences of the present with a decade ago make sense. State spending can not only provide capital with needed resources (physical, human and financial), but may be able to limit populists to their allocated space. Hence US capital not only throwing its weight behind making sure Biden defeated Trump, but also supporting the COVID response and infrastructure spending of Biden’s administration.

Of course increased government spending can benefit workers as well as business. However, the genuine improvement in material conditions for workers in the UK (and further afield) post WWII did not occur because of government spending but because workers were able to use their power to ensure spending went to areas that benefitted them. In a situation where capital is strong and organised labour weakened, the benefits to workers are likely to be limited (at best). Or to put it another way there is a big difference between social democracy brought about by labour power (whatever the real limits of such a system) and a “social democracy” of, and for, capital. The UK government’s recent proposed increase in National Insurance is an example of this capital directed “social democracy”, but also illustrative of how austerity post COVID will not simply be a replay of the Tory-Libdem coalition years. Further cuts to the health and social care services would not just be politically unpalatable but also detrimental for business. Instead a regressive tax increase is being used to make workers pay for the bosses mistakes.

In the past demands and aims from the “left” have often been framed around a return to classic social democracy – opposition to cuts, and support for the state to play a greater role. This overly statist view of social democracy (elect the right people/party and the rest will follow) was always naïve, neoliberalism requires a strong state. In an era where The Financial Times is looking at increased spending and greater state involvement, reliance on the state, and parties, makes even less sense. Rather class politics will need to be built by organising labour power against the increasingly synthesised capital and state.