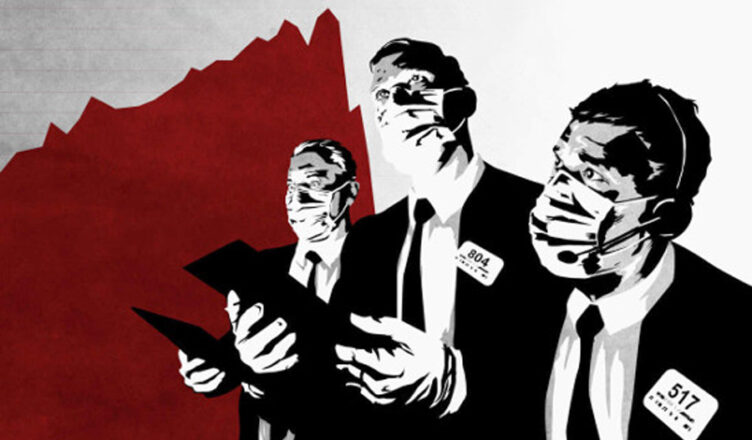 2020 will not be a year that is soon forgotten, even in the highly unlikely scenario that “it will be all over by Christmas”, the results of the Covid-19 pandemic will be long lasting. Yet for all that the consequences of Covid-19 has perhaps not changed things so much as fast-forwarded them. There have been many pieces asking what the economic consequences of Covid-19 will be (1, 2) but that very question already continues the separation of the economic and political. The economy exists because of the political forces that create it.

Businesses are using the pandemic to push forward policies and changes they have long desired, as many times before “flexibility” is the excuse made to increase workloads and diminish conditions. The decline of cash transactions meant that access to cash, hugely important for many working class communities, was already under threat, the lockdown and increase of online shopping can only have compounded the matter. Likewise, the Covid-19 crisis will only have exacerbated closure of street shops, resulting in lost jobs and emptied town centres.

Yet while the response of capital and states to Covid-19 have been (and will continue be) to protect and expand their own interests at the expense of the workers there are key differences in between 2020 and the response to the 2008 global financial crisis. It is telling that the Financial Times, capital’s house paper, which backed Conservative-led austerity post-2008 is in 2020 making an argument for a new type of civic contract and increased government spending (as well as being highly critical of the Johnson government). And the spending of governments in response to Covid-19, while usually wrongly directed, has been at incredible levels (again this change was already in the wind prior to Covid-19, in 2010 all three UK national parties backed austerity, by 2019 all three had, at least rhetorically, broken with it).

The altered response of liberalism in 2020 can be put down to pressure from two sources, On one side there has been the growth of (national) populism, liberal politics has largely been unable to effectively combat the growth of, often hard right, populisms. The Covid-19 crisis could act as a check on the growth of populism with rise in the popularity of technocratic measures, or alternatively it may be another trend that will be fast-forwarded by Covid-19, certainly the idea of “strengthened” border controls favoured by national populists align well with Covid-19 “security”. Mostly likely we will see a combination of both factors, with the degree of each playing out differently in different countries. However, even if there is move back towards liberal parties in the immediate aftermath of Covid-19, liberalism itself will ensure that there will be no end to populism. The other source of pressure on liberalism has come from labour. For all the failure and waste of energy that went into the Corbyn and other social democratic movements they did manage to tap into a swell of opposition to marketisation such that even the ideological liberals of the Financial Times and like have been forced to recognise that capital is feasting off labour to such a degree that it is in danger of harming itself.

For some social democrats the altered response of capital represents a rapprochement between liberals and social democrats (with an accompanying love in for a Starmer led Labour Party), or even signals the end of neoliberalism. Yet neoliberalism has always required a strong state, the different moves now being made are not to bury neoliberalism but rather to praise, and so save, it. A “return” to the state cannot provide labour with the means to restore the type of conditions that labour (or rather a section of it) may have enjoyed in the years after the Second World War. For good or ill the post-war social contract is gone and material interests that led to it will not repeat themselves. But that does not mean that labour cannot make gains, push back the power of the state and capital, and even end its own exploitation. The fallout of Covid-19 will result in both new dangers and new opportunities it is up to us to ensure that those dangers are averted and the opportunities exploited.