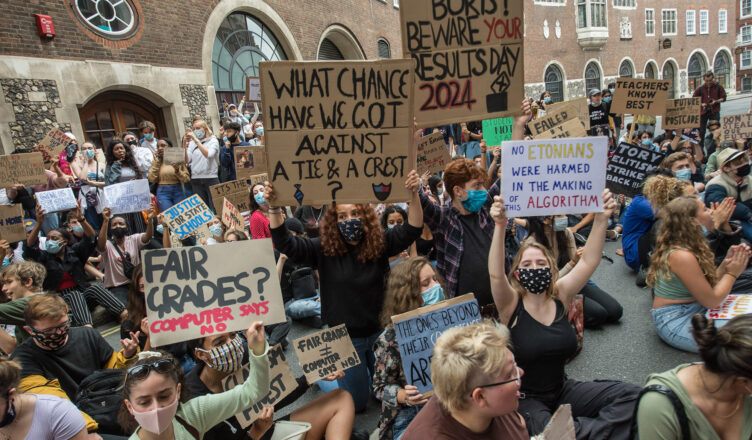 There cannot be that many people that don’t believe that the Conservative government has not made a mess of handling the assessment of A-Levels, BTECs and GCSEs, even traditionally Tory-friendly papers are mocking the Education Secretary Gavin Williamson. And it is hard not to conclude that the actions of the government have been inept. What happened in Scotland should have provided advance warning to the problem coming in England, Wales and Northern Ireland but the government carried on regardless, only to then follow Scotland’s example of announcing a U-turn and accepting teacher assessed grades as well as those predicted by the algorithm. This about-face has resulted in its own problems with some Universities/Programmes becoming oversubscribed (with resultant health and safety concerns) and others undersubscribed (and in greater financial difficulty and threat of bankruptcy).

Yet the hypocrisy of the other political parties, journalists and commentators decrying the Tory mess is hard to stomach. While Keir Starmer lambasted the government, the Labour government in Wales made exactly the same arguments defending the use of the algorithm as the Conservative Westminster government did. Likewise the SNP government in Scotland was initially making the usual noises about ‘grade inflation’, only to switch position when Labour, the Lib Dems and the Tories(!) moved a vote of no confidence in the Deputy First Minister. It seems that the algorithm is perfectly fine so long as it applies to where your party is in power.

The fact is, whatever the technical deficiencies of the algorithm used to assigned grades, it was doing nothing more than reflecting the systematic biases that presently exist, by design, in the UK education system. This whole mess, and the wider issues raised by Covid should be used as an opportunity to really rethink the education system(s) but while opposition parties are quite ready to try and profit from the current mess they have no fundamental disagreement with the current education system, apart from that it is not being commercialised enough.

The real changes that are needed in education will not be brought about by Labour, the Lib Dems or the SNP. These parties are just as guilty as the Conservatives, in creating an education system that is designed to fail millions. The fact that there exists private schools (a clear indicator of class privilege in society), so-called “free schools” and academies existing alongside state schools, shows an education system not fit for any purpose other than maintaining the capitalist system.

Ultimately, the education system needs to be built for the workers not for capital. But this kind of change in the education system will only happen when we change the whole social and economic system. That is obviously a longer term task but we can work towards it by engaging in fights for better pay and conditions of education workers, greater control from staff and students over their schools/colleges/universities, assessments that are designed for learning not merely sorting students.