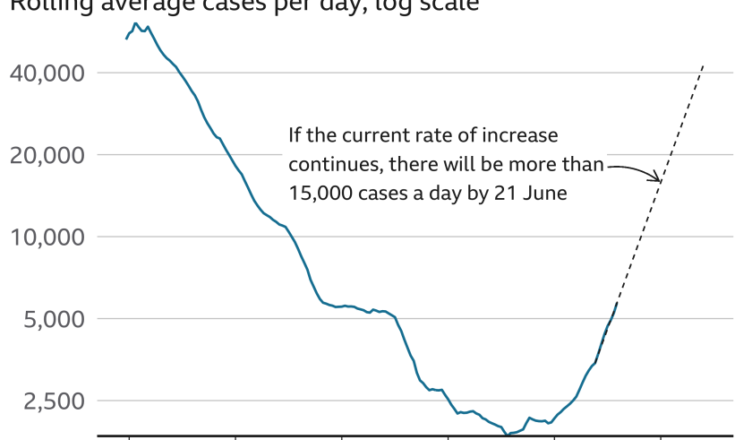 New daily cases as of June 28th were at 22,000, the most since January, and one of the highest number of daily cases in the world. Deaths and hospitalisations have been much lower than in the last wave but with this surge in cases we may see these figures going up in a few weeks.

Once again UK workers are finding themselves in danger because the government has been too slow to act.

First, the Delta variant that is driving the latest rise in cases was allowed to get a strong foothold in the UK because the Johnson government refused to put India on the red list for fear of upsetting the Modi government.

Second, one it had become clear that the Delta variant posed a significant new danger the government dithered over delaying “Freedom Day”. The argument from the media and bosses is that workers want lockdown to end – but the opposite is true. A large majority of people not only support the delaying of the 21st June lifting but a significant minority wanted a slower opening up even back in May.

The fact is that workers have always strongly supported and complied with measures to keep COVID from spreading. It is the bosses and their lackeys in parliament and the media that have been pushing against social distancing, travel restrictions and the like. Workers understand solidarity and want to protect each other.

In addition to exposing the UK governments lies and failures the delta variant again underlines the fact that all workers in the world, wherever they live, are in this fight together. Not only is there a clear cut moral case for the UK, US and EU governments to ensure that there is a sufficient supply of vaccines for those in the developing nations in Asia, South America and Africa. But it is also to the self-interest of us all to ensure that everyone, wherever they were born and live, can be vaccinated. A world where the G20 countries are vaccinated but where COVID is running rampant in other countries is a danger for all. Such a world will only encourage the development of new variants of COVID to which vaccines are less efficacious and/or more transmissible.

To ensure a safe world for all it is vital that vaccine production is open intellectual property not a tool for large companies to make obscene profits. In addition, production and supply capacities need to be available across the world in order to minimise the type of vaccine nationalism that large countries are engaging in.

First published on No Safety No Work.