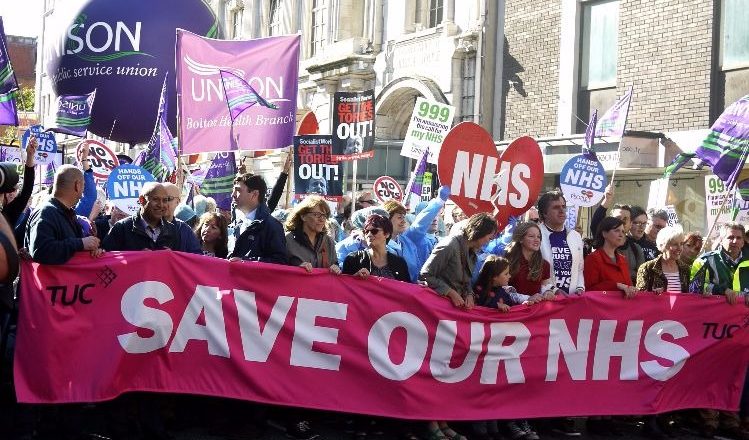 Healthcare in the UK is by no means “socialised”, as critics in the US claim. Though healthcare in the UK is undoubtedly better than healthcare in the US – just as other countries have better healthcare than the UK – it is still subject to the pressures and dynamics of capitalism, existing as it does in a capitalist society. It has also been increasingly marketised over recent decades, with attacks on both social provision and NHS workers coming under the cover of “privatisation” – the introduction of payment by results has introduced a market in health services, many non-frontline services have been privatised or contracted to companies like DHL, the introduction of wholly privately owned and operated “NHS treatment centres”, the rollout of Private Finance Initiatives etc all represent part of the same project of “rationalising” social provisions to the benefit of the overall capitalist system. Even the NHS in its classic form, as the centrepiece of the post-war welfare state, came as part of the attempt to stave off prewar-style class conflict and integrate the working class more closely into the state following the end of the war, and to provide a healthy working class that could fight and die for the bosses in their wars (our masters struggled to find enough fit cannon fodder for their First World War) and healthy enough to slave for their profits in paid jobs, and in unpaid childcare and housework, as well as from the needs for capitalism to stabilise itself after the turbulence of the 1920s, in a change of tactic well-known as the post-war settlement.

We need to defend health services, but critically. The NHS was never ‘ours’ and it is far from perfect.

Since the inception of the NHS, consultants were allowed to use NHS time and resources for their private gain, freeloading that the Daily Mail and their mates are happy to ignore. The Health Service treats our illnesses as individual cases, but most of our illness is due to economic and social conditions that we face collectively: unhealthy and dangerous workplaces, overlong hours and night time working, pollution from factories and cars, poor food, unhealthy housing, lack of trees and greenspaces, all exacerbated by racism and sexism for large sectors of the population. In the 1960s and 1970s women highlighted how unequally they were treated, particularly around childbirth. They won some improvements through struggle, but we are still miles from a genuine community health service.

We know that the current Tory government is making massive cuts to health services with closures of hospitals, casualty departments, rationing of services by age, cuts to services for the elderly and people with disabilities, near frozen wages of overworked staff etc. The whole idea of running healthcare as a business is contradictory (treatment based on ability to pay rather than need), and only benefits the well-off who can always pay for treatment, and the drug companies and other corporate vultures who are taking over more and more of the health service. The whole idea of ‘choice’ in this context is similarly a nonsense. We don’t want to choose which doctors or hospital service to use (the one round the corner / or the one 20 miles away?), we need local services, all of which are accessible and good.

Who Is To Blame?

What is causing the ongoing and deepening crisis in the NHS (and) the ‘lack of money’? Is it –

NONE OF THE ABOVE!

Back in 2005 the now Health Secretary, Jeremy Hunt, co-wrote a pamphlet calling for the replacement of the NHS with a market insurance system, with the heavy involvement of private enterprise. A fox in charge of the hen coop! The policies pursued are obviously part of a death by a thousand cuts /privatisation by stealth strategy. The idea that the slow death of the NHS is just down to the Tories is delusional however. The PFI (Private Finance Initiative) was a Conservative idea they left on the shelf, with little of it being implemented. It was Labour’s Tony Blair and Gordon Brown who activated it when in government: schools and hospitals were built with finance from the private sector (banks etc) who then leased them to back to the government, who paid for them over the long term on a mortgage basis at a much higher cost (40% more). Old hospitals were closed, so overall there were fewer beds. Labour also introduced ‘the market’ into the health service, the equivalent of putting leeches into a blood bank, and introduced Foundation Trusts. These Labour policies left the NHS with debts of £81.6 billion, and they together with massive ongoing cuts are the cause of the crisis.

What Do We Want, And How Do We Get There?

We need to stop hospitals, casualty departments etc being closed, attacks on GPs, staff cuts, freezing of the wages of health service staff (which are cuts as rents, food etc go up). We need to stop the increasing marketisation of the NHS. We need to stop the NHS being run as a business concern, with vastly overpaid administrators at the top, with at least 800 of these on six figure salaries. We need to end the rigid hierarchies in hospitals, where decisions cannot be questioned, as witness the recent revelations about Gosport War Memorial Hospital where over 450 patients died after being prescribed dangerous painkillers and with according to a recent report “patients and relatives powerless in their relationship with professional staff”. We need to end the grip of drug companies on the NHS. In 2016 alone, the NHS payed these companies £1 billion for drugs for arthritis, cancer, MS, etc. The research for these drugs was funded by public money. “Big pharmaceutical companies are ripping us off by taking over drugs developed primarily with public money and selling the drugs back to the NHS at extortionate prices”. Heidi Chow, Global Justice Now.

How we do this is crucial however. If we use the same old tired methods of petitions, relying on union bureaucrats, trusting in political parties (whoever they are) not only will we probably lose, but we will remain powerless, divided, and with an illness service that doesn’t meet our needs or tackle the causes of our ill health. We need methods and organisation that empower us: to organise ourselves, control our own struggles, without leaders, and to use direct action methods: occupations, work-ins, strikes, work to rule etc. We need to break down the barriers between staff and patients, carers and service-users, workers and unemployed to link our struggles.

What do we want? – A free health service controlled and run by the staff and users. An emphasis on empowering people through helping them to educating themselves in groups about their bodies and health (e.g. books and pamphlets such as ‘Our Bodies Ourselves’ and the collective work in the last wave of feminism). Communities working together to tackle the causes of ill health: dangerous and unhealthy workplaces, an unhealthy, car-based transport system, poor food, widespread pollution, lack of green spaces for relaxation, and exercise etc. Move away from processed and unhealthy food, and from the current over-reliance on drugs. Again, self-organisation and direct action are key. But surely this is pie-in-the-sky? No, we are drawing on what people have done, and are doing, both here and abroad. In Greece, massive health cuts have resulted in health workers running hospitals and clinics etc for free, with the support of their local communities.