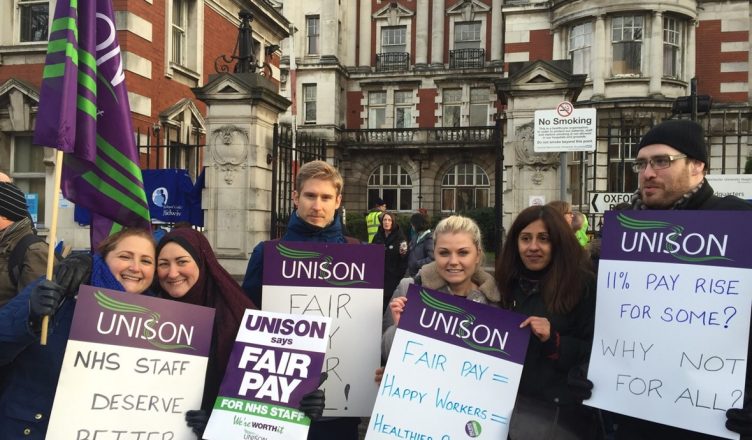 We must fight health cuts, critically: the NHS – never ‘ours’, is far from perfect. Set up after the Second World War to ensure healthy workers (to fight the bosses wars, slave for their profits, do vital but unpaid childcare and housework).

Illness is treated individually, but ill health is mostly caused by economic and social conditions we experience collectively:  dangerous workplaces, overlong hours, factory and car pollution, poor food, unhealthy housing, lack of trees and greenspaces, plus racism and sexism for many. In the 1960s and 70s women fought against inequality and dehumanising treatment. They won improvements, e.g. improved contraception, but a community health service remains distant.

The Tories health cuts continue with closures of hospitals, casualty departments, rationing of services by age, cuts to services for the disabled, to underpaid and overworked staff etc. Running healthcare for profit is contradictory (treatment based on ability to pay, not need), and only benefits the ‘haves’ who can always pay, and the drug companies and other corporate vultures who are cannibalising the health service (e.g. Virgin, given nearly £2 billion of contracts since 2013). We don’t want ‘Choice’:  we need local services, all both accessible and good.

NHS Crisis: Who Is To Blame?

What is causing the NHS crisis (and) ‘lack of money’? Bed-blocking by old people? Obesity, smoking and alcohol abuse amongst the poor? Migrant workers and health tourists? The rising cost of the NHS, due to an ageing population, making it ‘no longer affordable’?

NONE OF THE ABOVE!

The Tories’ policies are privatisation-by-stealth. All the parties are responsible however: the Lib-Dems (in Coalition government). New Labour used the PFI (Private Finance Intiative) to build schools, hospitals etc with mortgage finance from the private sector (banks etc) who leased them back at a much higher cost (40% more). Old hospitals were closed, cutting bed numbers. Labour also introduced ‘the internal market’ and Foundation Trusts into the Health Service. NHS was left with debts of £81.6 billion, these with cuts, are the cause of the crisis.

What Do We Want, How To Get There?

We need to stop cuts, and to create a community health service.

How is crucial: using the old tired methods (petitions, trade unions, political parties etc), we will lose, and remain powerless and divided. We need methods and organisation that empower us: to organise ourselves, without leaders; and use direct action: occupations, work-ins, strikes, work to rule etc. To break down the barriers between staff and patients (e.g. ignoring prohibition of joint protests), carers and service-users, workers and unemployed, to link our struggles. We can empower ourselves through self-education in groups e.g. about our bodies and health, as in the Womens’ Movement; through communities tackling the causes of illhealth collectively e.g. fighting fracking plans; growing and/buying healthier food together in allotments and co-ops etc.

What do we want? – A free health service controlled and run by the staff and users together.

Pie-in-the-sky? No, we learn from struggles here and abroad. In Greece, massive health cuts have resulted in healthworkers running hospitals and clinics etc for free, with the support of their local communities.